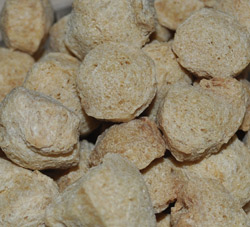 A recent study has revealed that, taking two servings of soy daily can reduce the frequency and intensity of hot flashes to 26 percent.

The findings were concluded with the review of 19 earlier studies examining over 1,200 women.

Though, the effectiveness of soy in pacifying hot flashes is still not very clear, as a few studies suggests soy to be beneficial and others do not and most of the controversies are due to the small sample sizes and inconsistent methodology, says the authors.

"When you combine them all, we've found the overall effect is still positive," said Melissa Melby, a medical anthropology professor at the University of Delaware and co-author of the study.

Consuming at least 54 milligrams of soya every day for continuously six months to a year can reduce the frequency of menopause hot flesh up to by 20.6 percent and its severity to 26 percent in comparision to a placebo, found Melby and her colleagues while examining the effect of soy isoflavones, the chemicals found in soy and have a mild estrogen-like effect.

However, the reduction in frequency and severity can be even more due to the placebo effect.

In addition to that, it was found that, in case of a longer duration studies when women consumed soy isoflavones for continuous 12 weeks or more, the decrease in hot flash frequency was significant to approximately threefold greater than in shorter-duration trials.

Supplements of Isoflavone containing higher levels of genistein to at least 19 milligrams, one of the two main types of isoflavones, was more than twice as effective at reducing hot flash frequency as the lower amounts.

Melby called the genistein results are significantly notable as the compound is one of the primary isoflavone in soybeans and soy foods, suggesting that, "Eating soy foods, or using supplements derived from whole soybeans, may work better for women."

Each gram of soy protein present in soybeans and other conventional soy foods provides approximately 3.5 mg of isoflavones.

Researchers have found that the Japanese women are likely to have low frequency of hot flashes due to the high consumption of soy that often begins in utero and continues throughout the life.

"Soy is probably more effective in these women," Melby said.

"But if you're 50 and you've never touched soy, it's not too late. We've found that it still helps," Melby added.

The details of the study have been published in Menopause: The Journal of the North American Menopause Association.

-with inputs from ANI.