Bio-energy crops can be dangerous to wildlife 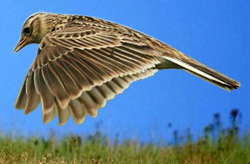 A recent study has revealed that the practice of converting farmland to produce bio-energy crops can be harmful to the wildlife.

"The Skylark is an indicator species for agricultural areas because it occupies many habitats...," noted Jan Engel, from Helmholtz Centre for Environmental Research, Leipzig in Germany, who led the study.

Engel and colleagues has developed a computer model that calculates the requirement of habitat of Skylark in a variety of bio-energy production scenarios, said a university statement.

The study found that, expansion of bio energy crops will not be harmful to Skylark, if the field sizes remain smaller, many crop types are present, and small natural areas, known as Integrated Biodiversity Areas, are included within the landscape.

"In ecology it is a widely accepted idea that abundance and occurrence of particular species can broadly indicate the condition of the respective ecosystem," said Engel.

The recent decline in the Skylark population predicts the depletion of farmland ecosystems.

"However, we could show that bio-energy cultivation can get harmonized with Skylark conservation by application of regionally adapted actions," concluded Engel.