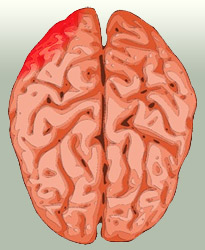 For every man with a migraine, three women are affected by the severe headache that is often affected with nausea and sensitivity to light and sound, say experts.

Surprisingly 25 per cent of women have gone through migraine that makes it one of the most common disabling conditions worldwide.

The study that used various neuroimaging techniques have exhibited that migraines are not a result of the constriction and dilation of blood vessels, but the problem is a result of brain excitability.

The female brain has an 'intrinsic excitability that predisposes them to migraines,' says researchers.

Dr Andrew Charles, director of the Headache Research and Treatment Programme at the University of California, says that women have a faster trigger than men for activating the waves of brain activity thought to underlie migraines, says a Daily Mail report.

Dr Charles said that migraines show cortical spreading depression (CSD), when dramatic waves of activity spread across the surface of the brain.

This starts not only the pain of a migraine but also aggravates the visual symptoms, nausea, dizziness and difficulty concentrating so common in sufferers.

Dr Charles and fellow researcher Dr Kevin Brennan put into practice imaging techniques to visualize the beginning and spread of CSD in mice.

During their research Female mice showed a considerably lower threshold for CSD as compared with males. It denotes, it was very easier to trigger the waves of brain activity believed to underlie migraine in females than it was in males.

An array of factors is responsible to reduce the CSD threshold in both sexes, making them more prone to migraines. Genes, hormones and environmental triggers such as stress, diet, changes in sleep patterns and a host of other factors are responsible for it.

It is commonly observed that migraines in females vary with the menstrual cycle and are more frequent during the menstrual period; Dr Charles said his findings are independent of a specific phase of the cycle.

"We didn't monitor the estrous cycle in the female mice, so it's likely we sampled from different estrous phases in different animal," he said further.

"Yet we still found a consistent difference in the CSD threshold between males and females.

"Our results suggest that the female brain has an intrinsic excitability that predisposes them to migraine that may not be simply linked to a specific phase of the menstrual cycle," he added.

But some researchers differ from his version saying migraines are aggravated by the hormonal fluctuation of a woman's menstrual cycle.

The chances of experiencing migraine are slightly more in boys than girls, but once a girl starts menstruating, the likelihood of her suffering a migraine increase manifold.

Hormone estrogen is held responsible for it, although other hormones are also thought to aggravate this disease.

"We've begun to see from researchers that the frequency of migraine attack is linked to permanent changes in the brain, and I think that changes the playing field for patients and those of us who take care of them", Dr Jan Lewis Brandes, of the Nashville Neuroscience Group has been reported telling to NPR.org.