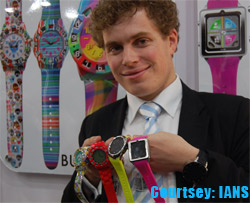 Taking a leapfrog from Europe to India, a Netherland based wrist watch mobile phone making company on Friday has put its first step in India by opening its three outlets in capital and capital region and launching its some models to attract customers.

Using their device, you can make and receive phone calls, send and receive SMS, access internet, take snapshots from its camera, do video recording and all those which a modern smart phone contains, he said.

Moreover, the features of bluetooth, image viewer and file manager are also included in it.

Koen also informed that company, which is now targeting to open 20 outlets in India across the country viewing its rich and broad market.

"India is emerging as one of the key market for technology products as India's expanding economy and rising disposable incomes are fostering demands for such gadgets," Koen Pieters said.

"India is the next focus destination for Burg in its global road map. We will keep introducing our wide range of futuristic products for Indian consumers at their door steps," he added.