Lady Gaga all set for her European dates 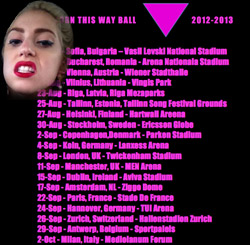 World's famous star Lady Gaga is all set to embark her another world tour in which she will be beets her 21 European dates. She has announced her dates for the European leg of Born This Way Ball tour. She has informed this with her twitter account, which shows that it will be start in Bulgaria on August 21, and end in Barcelona on October 6.

Gaga twitted that the "The first 21 European dates to THE BORN THIS WAY BALL will be announced and tweeted at 3am EST/12am PST/7am GMT. I'm so excited! #pawsup".

Gaga's announcement has comes after both the Asian and Australasian leg's sold out incredibly quickly.

The tours, which will be produced by Live Nation, have been kicks off in Seoul, North Korea on April 27.

British glam rockers The Darkness will be her support act for the European tours.

The singer said in a statement that the Haus of Gaga and I have worked for months conceiving a spectacular stage. The Born This Way Ball is an Electro-Metal Pop-Opera; the tale of the Beginning, the genesis of the Kingdom of Fame. How we were birthed and how we will die celebrating.

It is noted that the new tour is her first gigs since the phenomenal sales of her last album Born This Way, which has sold almost 6 million copies since its May 2011 release.