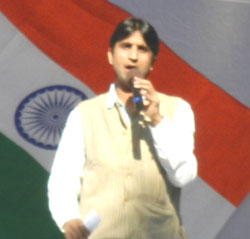 Team Anna member Kumar Vishwash has said that Press Council of India chairman Markandey Katju's remarks regarding the Lokpal body can be his personal but he does not agree with him. He said that millions of people came out on the street and they have been fighting for more than 40 years for enactment of the law.

Vishwash commenting on his remarks said that it is his personal view. Millions of people came out on the streets to support Jan Lokpal bill, more than 15 interaction sessions, small or big, were held in the last 2 to 3 years to discuss it. If Markandey Katju is such as scholarly person or repository of all the wisdom then I disagree with him as a common citizen, as a person and as a social activist.

It is noted that Katju had urged parliament to refer the bill to a committee for further consideration to create workable anti-graft investigation machinery. (With inputs from ANI)