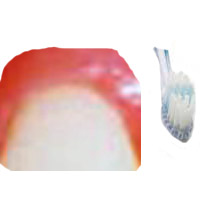 Most of us think that brushing teeth twice daily is enough for healthy teeth but rubbing toothpaste on your gums too, after lunch significantly reduces the risk of developing cavities, a study says.

"Rubbing toothpaste on to your teeth (and gums) increases the flouride protection by 400 percent," Anna Nordstrom from the University of Gothenburg, Sweden who led the study explains.

"This 'massage' method proved to be at least as effective as a third brushing in increasing the amount of fluoride in the mouth," Nordstrom said.

Researchers of Gothenburg reached to this conclusion after testing the effect of a high-fluoride toothpaste commonly sold in Sweden. During the study the researchers asked volunteers to brush several times a day and also tested out the 'finger rubbing' technique, says the Daily Mail reports.

"Rubbing the front of your teeth with toothpaste can be an easy way of giving your teeth a third 'shot' of fluoride during the day, after lunch for example, Nordstrom has been quoted as saying.

Fluoride is a naturally available mineral that checks decay by strengthening the protective enamel coating on teeth.