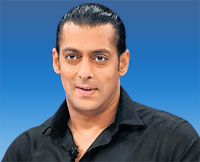 Well known actor and Bollywood star Salman Khan has Ventured into a business. Salman has recently invested in the online travel portal Yatra.com and will also appear in its new marketing campaign in India and the US.

This relation will make strong the company's presence in the masses and increase the brand's recall value in tier-II and III towns, a press statement says..

The Bollywood actor is looking looking forward to the venture.

"I am really excited about my association with Yatra.com. This is not a normal brand association, where I am there just for face value. With Yatra, I am also now a shareholder," Salman has been quoted as saying.

"I have immense confidence on the brand and am hopeful that the association will be beneficial for the both of us," he stated.

The "Dabangg" and "Bodyguard" star's NGO, Being Human, too will be a beneficiary of this association.

As part of the effort, Yatra.com will contribute a token amount to Being Human every time a transaction is made on its website. This travel company will also sell Being Human merchandise on its website, the sale of which, again, will be given to the NGO.

"We have always wanted expand to newer mass markets and associating with Salman would enable us to do the same," Dhruv Shringi, CEO and co-founder, Yatra.com has been quoted saying.

The new marketing campaign of the brand will start in April.