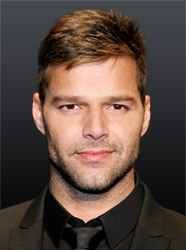 Noted Singer Ricky Martin dedicated a prize he received from the Gay and Lesbian Alliance Against Defamation to a Chilean gay man who got injured and is in critical condition after a group of neo-Nazis attacked him.

"Last night I won a @glaad award! I am honored and thankful and would like to dedicate it to #DanielZamudio and his family #Chile," Martin tweeted on Monday.

The Puerto Rican singer was one of the first well-known personalities who came forward to disapprove the brutal March 3 attack on Zamudio for his sexual orientation.

Zamudio, a Chilean, is in critical condition after being beaten for six hours by several men who pelted stones at him, attacked him on the head, marked his body with swastikas and injured one of his ears.

Since making his sexual orientation public in 2010, Martin has been active in all types of causes linked to the gay movement around the world.

The singe also became the image of the MAC Viva Glam campaign to get funds for the fight against AIDS, and recently, after acquiring Spanish citizenship, he offered his strong support for same-sex marriage law of Spain.