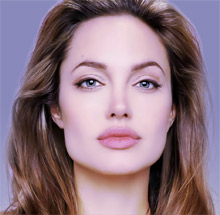 Academy award winner actress Angelina Jolie is excited about her upcoming movie "Maleficent" where she will wear horns for her role. She said that role of the villainous fairy will actually be good for young girls.

"I start it in June, and it's a really great script. I'm having a lot of fun. I've already got my horns fitted. My kids are very happy. We're still figuring out the look. We're experimenting with different things. But the horns are the horns. You have to have horns," she has been quoted saying in femalefirst.co.uk.

The actress will portray as villainous fairy in the Disney production, which re-imagines the classic "Sleeping Beauty", and of the opinion that the story narrates her character in a positive way.

"It's not anti-princess, but it's the first time they're looking at this epic woman," ew.com has quoted her as saying..

"I hope in the end you see a woman who is capable of being many things, and just because she protects herself and is aggressive, it doesn't mean she can't have other [warmer] qualities. You have to figure out the puzzle of what she is.

"It sounds really crazy to say that there will be something that's good for young girls in this, because it sounds like you're saying they should be a villain. [Maleficent] is actually a great person. But she's not perfect. She's far from perfect," she said.