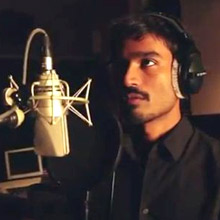 "Kolaveri Di", the most popular song of last year crossed 50 million hits on YouTube on Monday, showing that the unusual "Tanglish" track has still not lost its interest among the listeners.

The song is sung by Aishwarya Rajinikanth Dhanush or "Dhanush" was officially released on 16 November 2011 and instantly became the most searched Youtube video in India and spread like a virus on social networking sites.

The song has been composed by 21-year-old Anirudh Ravichander which is a part of Dhanush’s upcoming movie 3’s which is to be release later this year. Dhanush is a popular Tamil actor and Rajinikanth's son-in-law. The film will be the directorial debut of Dhanush wife wife Aishwarya Rajinijanth.

After the success of the song 'Kolaveri Di', Dhanush has also composed Sachin Tendulkar anthem which also became quite popular.

The popularity of the song led many music directors across the world to parodies in various languages around the depicting different types of situations.