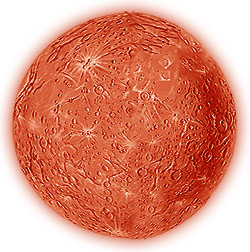 Latest research has revealed new finding regarding Mercury, which presents another picture of the planet. Findings show about the interior topography and the mysterious radar bright material in the permanently shadowed areas near the poles. Mercury's core is larger than expected-almost 85 percent of the planetary radius. All have happened by the pictures sent by MESSENGER spacecraft, which was on the mission for study Mercury.

UC Santa Barbara physics professor emeritus Stanton Peale, who devised the procedure used for detecting whether or not Mercury had a liquid core says that Mercury is the last unexplored planet and the way Mercury was formed may show some constraints on the formation of the solar system. Mercury's core is larger than expected-almost 85 percent of the planetary radius. The Earth's core, in contrast, is just over half of the planet's radius. Findings shows that The scientists, led by MIT researchers David E. Smith and Maria T. Zuber, also found that Mercury's solid outer core and liquid inner core contain more iron than Earth, relative to the whole planet, which influences the way Mercury's magnetic field was generated. However, Peale noted that the surface is comprised of lighter elements.

Santa says that we didn't expect so much sulfur and there was almost no iron found on the surface of the planet. With no iron, the volcanic surface rocks are too light to have come from a mantle with the large average density derived for the internal structure.

This led to the concept of a two-layer mantle-with a light upper silicate layer, which could provide the low-density surface material-over a dense iron sulphide layer.
In the larger picture, the presence of inordinately large amounts of sulphur on the surface indicates that Mercury's formation was not as orderly as some scientists had previously assumed, according to Peale. It has been says that Mercury is composed of material that had condensed over a wide range from the Sun, he added.

Apart from this the spacecraft in which it has been shows that has revealed many other findings a smaller spread in elevations compared to those of Mars or the Moon.

Other findings include a precise topographic model of the planet's northern hemisphere, which reveals a smaller spread in elevations compared to those of Mars or the Moon.

(With Input from ANI)