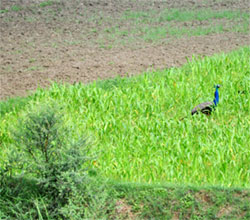 If someone thinks that noise affects only birds and animals in our surroundings, then we are wrong. Latest research shows that man-made noise ripples effects on plants too. A series of research have been done and conclusion found was surprising. In some cases some of the plants were friendly with noise where as generally its effects were noticed on the plants during experiments.A growing body of research found that birds and other animals change their behaviour in response to manmade noise, such as the din of traffic or the hum of machinery. But because many animals also pollinate plants or eat or disperse their seeds, human noise can have ripple effects on plants too, according to a new study.It is noted that in cases where noise has ripple effects on long-lived plants like trees, the consequences could last for decades, even after the source of the noise goes away, said lead author Clinton Francis of the National Evolutionary Synthesis Center in Durham, North Carolina.

Researcher conducted a series of experiments from 2007 to 2010 in Bureau of Land Management's Rattlesnake Canyon Wildlife Area in northwestern New Mexico. The region is home to thousands of natural gas wells, many of which are coupled with noisy compressors for extracting the gas and transporting it through pipelines. The compressors roar and rumble day and night, every day of the year.

During experiments researchers patch consisted of five artificial plants with three each microcentrifuge tubes wrapped in red electrical tape, which were filled with a fixed amount of sugar water for nectar. To help in estimating pollen transfer within and between the patches, the researchers also dusted the flowers of one plant per patch with artificial pollen, using a different colour for each patch.

Din levels at noisy patches were similar to a highway heard from 500 meters away, Francis explained. When the researchers compared the number of pollinator visits at noisy and quiet sites, they found that one bird species in particular - the black-chinned hummingbird (Archilochus alexandri) - made five times more visits to noisy sites than quiet ones.

Each patch consisted of five artificial plants with three "flowers" each - microcentrifuge tubes wrapped in red electrical tape - which were filled with a fixed amount of sugar water for nectar.

In a second series of experiments at the same study site, the researchers set out to find out what noise might mean for tree seeds and seedlings, using one of the dominant trees in the area - the pinon pine (Pinus edulis).

After three days, a number of animals were spotted feeding on the seeds, including mice, chipmunks, squirrels, birds and rabbits. But two animals in particular differed between quiet and noisy sites -mice, which preferred noisy sites, and western scrub jays, which avoided them altogether.
Pinon pine seeds that are eaten by mice don't survive the passage through the animal's gut, Francis explained, so the boost in mouse populations near noisy sites could be bad news for pine seedlings in those areas.

In contrast, a single western scrub jay may take hundreds to thousands of seeds, only to hide them in the soil to eat later in the year. The seeds they fail to relocate will eventually germinate, so the preference of western scrub jays for quiet areas means that pinon pines in those areas are likely to benefit.

In keeping with their seed results, the researchers counted the number of pinon pine seedlings and found that they were four times as abundant in quiet sites compared with noisy ones.It may take decades for a pinon pine to grow from a seedling into a full-grown tree, Francis said. This means the consequences of noise may last longer than we thought. Thus it should be in our mind that not only animals and birds but also plants pay cost of noise created by us.

(With Input from ANI)