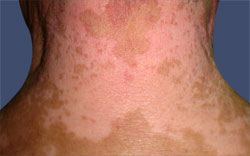 There is good news for those suffering from vitiligo - a chronic skin disease that causes areas of the skin to become depigmented, as a US dermatologist has offered fresh information on various surgical methods that may lead to more effective treatment of vitiligo.

Vitiligo most frequently affects the face, elbows, knees, hands and feet, and its symptoms are more evident in people with darker skin complexion.

The general prescriptions for vitiligo comprise topical medications and light therapy that can be used in tandem to reinstate pigments that get affected in this disease.

With introduction of newer surgical techniques success rate in restoring pigment to the affected areas has increased to a large extent.

Important among these new surgical techniques is skin grafting, where normal skin is used as donor tissue and then grafts are surgically transplanted on the regions of the body affected with vitiligo. The new skin grafts begin producing pigment.

The ideal Patients to use this surgery technique are the one who have stable vitiligo, or vitiligo that is steady for at least six months.

This technique can be applied in patients with limited areas of vitiligo and also in those in which this disease is wide spread. The patients with vitiligo have liberty to choose grafts for one part of the body and another therapy for other parts affected with this disease.

Owing to high success rate of skin grafting up to 80 to 90 percent in most patients, this treatment offers a ray of hope in patients.

This in-office procedure is not very common in the United States but is in common practice in other countries (particularly in South America, Europe, Southeast Asia, India and China).

In melanocyte transplants, melanocytes and keratinocytes (the cells of the top layer of skin) are surgically taken under local anesthesia from the patient and then cultivated in a culture in the lab overnight.

This therapy is given in-office and best used in areas of limited vitiligo where the vitiligo has been steady for no less than six months.

Melanocyte transplants are successful in 95 percent patients, a success rate that is considered very high.

Maintenance following surgery is also a recent technique used for the treatment for vitiligo. In this type of therapy, cells are stimulated by phototherapy to make new pigment faster in treated areas. This treatment is used after both skin grafting and melanocyte transplants.

In case of topical therapies, results vary from patient to patient and Dr. Halder observed that on average 45 to 50 percent of patients show satisfactory response using topical therapies to restore pigmentation.

The time taken for this treatment is around four to six months, but patients may require maintenance therapy if pigmentation is lost after the course of treatment.

But in the cases where 20 percent of the skin is affected with vitiligo, diverse amounts of topical corticosteroids can be administered to nearly any part of the skin affected by vitiligo, including the face.

Though, a small concentration may be prescribed for the face, as some concentrations can be too strong for this part of the body.

The major side effect of using long-term topical corticosteroid treatment is thinning of the skin. Due to this reason, one needs to monitor this therapy carefully while using it in children.

Topical immunomodulators, or calcineurin inhibitors has ability to regulate the local immune response of the skin. Two common therapies used to treat vitiligo are tacrolimus and pimecrolimus.

There are a host of laser and light therapies that can help treat vitiligo, and some of them needs patient to be exposed to a regulated quantity of ultraviolet (UV) light.

In widespread vitiligo, spread over 50 percent of the skin surface, or if it results in facial disfiguration, some patients chose depigmentation (a form of bleaching the skin) to blend the rest of the pigmented skin with skin affected with vitiligo.

"It is important for anyone who notices any unusual changes in the pigmentation of their skin to see a dermatologist, as vitiligo treatments are more successful the earlier they are started," Dr. Halder has been quoted as saying. .

"The newest surgical grafting techniques and transplant procedures hold a lot of promise for successfully treating vitiligo, and I think we'll see more dermatologists offering these cutting-edge procedures in this country in the future," Dr. Halder explained.

--with input from ANI