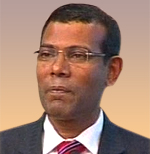 Maldives President Mohamed Nasheed Tuesday announced to resign from his post amid huge mounting pressure. He was facing the protest demonstration from across the country after giving the order to arrest the Chief Justice.

The situation of Maldives, a country of 1,192 Indian Ocean islands scattered across the equator became unrest three weeks ago when President Nasheed ordered the army to arrest the Chief Justice of Maldives Abdulla Mohamed on charges of misconduct and favouring opposition figures. After his order, huge protests across the country began and intensify as the time passes.

The opposition of Nasheed began to protest him and gradually the protest fire spreads into the police. Today, according to sources, hundreds of policemen began to demonstrate in the capital, Male. Officials ordered them to withdraw protection for both pro and anti government supporters who were protesting in the streets.

When Nasheed himself visited to street and urged the police to end the protest, they refused and instead chanted for his resignation.

After mounting pressure, Nasheed has to step down from his post. Resigning from the top position, Nasheed said, "It will be better for the country in the current situation if I resign. I don't want to run the country with an iron fist. I am resigning."

His deputy Vice President Mohammed Waheed Hassan will take over the seat and will govern to 2013 until the next election concludes.

Earlier, the so called mutiny police by the Presidential office today morning took over the state television broadcasting station and joined opposition protesters who have been demanding Nasheed's resignation.

Mohamed remains in military custody. The vice president, Supreme Court, Human Rights Commission, Judicial Services Commission and the office of the United Nations High Commissioner for Human Rights have all called for the judge to be released.

Nasheed was elected in 2008 when the Maldives staged its first democratic presidential election, unseating the long-serving autocratic regime of Maumoon Abdul Gayoom.