Spinach The green wonder of Ayurveda 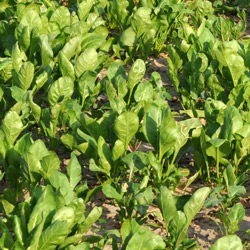 Spinach, the most commonly found green leafy vegetable is known to show miraculous health benefits and has been mentioned in ayurvedic texts for its numerous ayurvedic properties. The wonders of spinach can be imagined with the fact that a single herb can be used for the treatment of numerous ailments including cancer, obesity, blood pressure, heart problems, birth defects and much more.

This leafy green is enriched with several minerals and vitamins that are necessary for the proper growth and nutrition of the body and thus helps to accomplish healthy body. The major contents of spinach includes Vitamin K, Vitamin A, Manganese, Folate, Magnesium, Iron, Vitamin C, Vitamin B 2 (Riboflavin), Calcium, Potassium, and Vitamin B 6. In addition to that the plant is also a rich source of tryptophan, dietary fiber, copper, protein, phosphorous, zinc, omega 3 fatty acids, vitamin B3 (niacin) and selenium. Thus the rich composition of spinach makes it an important herb for the treatment of variety of disorders.

The potential of spinach was recognized by ayurveda for centuries. It has been used for the treatment of a range of health disorders for ages and hence considered to be one of the most important herbs in ayurveda. Some of the best medicinal uses of spinach can be described as:

Though, spinach is rich in several medicinal properties, you should keep some points in your mind before its consumption. Consumption of raw spinach should be avoided as it can lead to problems like arthritis, rheumatism and gout due to presence of oxalic acid in it. It is recommended to boil the leaves before consuming it.

Moreover, due to use of several sprays and pesticides in spinach today, the quality of spinach has degraded with time. So, you should always buy green spinach with no yellowing or yellow leaves. Wilted leaves should also be avoided. It is also recommended to consume it completely once you made it rather than eating the stored vegetable.