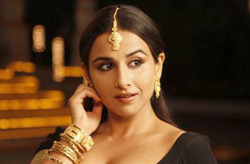 The movie, which was based on the south sex symbol of 80's Silk Smitha and directed by Milan Luthria became one of the highest earning releases of the year 2011 with a gross earning of 23.4 million dollars.

Addressing the spectators at the event, Vidya who played the leading role of the character thanked the crowd and the audience for appreciating her role in the movie and making the film a huge success.

"To have got the opportunity to work- to play Silk and to have worked with that team was the biggest award of course there is nothing like audience appreciation and people across the world have liked this film we are all very grateful for that," Vidya said.

'The Dirty Picture' is the highest pirated film in the history of Indian movies' said Ekta Kapoor, the producer of the movie who was also present at the event.

"The Dirty Picture is the highest pirated film in the history of Hindi movies and if had not come out with the DVD now the pirates would have earned much more money that they already have done," she added.

- with inputs from ANI