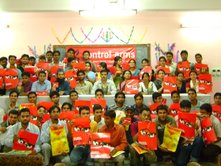 With a view to create awareness among students about terrorism and human rights, Amnesty International India organised a photo exhibition in its one-day workshop on “Control Arms” at Women's Polytechnic Auditorium at Aligarh Muslim University.

Amnesty International tried to create awareness about how some countries like America, India, Japan, china and Burma ignoring the guidelines of Human right commission in the name of Anti-Terror mission.

While celebrating “Arms Control week”, Amnesty International India (AII), AMU Club, exhibited photos and posters of war against the Terror along with human rights awareness. They appealed for unity against all kinds of terror. A power point presentation on the Control Arms campaign was also shown by AII members which followed by the screening of Amnesty clippings on the said topic.

Dr. Mohibul Haq, lecturer, Dept. of Political Science, AMU delivered an inaugural lecture on the aims and objectives of the Control Arms Campaign.

Prof. Shamim Ahmad, Principal, Women's Polytechnic had also thrown light in respect to the role that Indian Government could play in controlling Arms Trade. He said that this was a workshop to create awareness among the students about terrorism and human rights.

He further said that world has to accept human rights above the anti-terrorism mission. He gave an example of Maoist of Nepal and said they were in terrorist list of America and trying to get their rights. Now finally world accepted them and they came in to the power through the proper democratic system.

Dr. Mohibul Haq, project manager, Amnesty International Club, AMU said that arms trading, which is being done by some developed countries with under-developing countries in the name of defence, also being misused to supply to some terrorist groups and that is one of the major causes of today’s terror situation in the country as well as the world.