An Indian talk T.V. show 'Satyamev Jayate' was first premiered on 6th may 2012 on various channels within Star Network along with DD National. The show has been in top and latest news for last few weeks due to its high influence on the society.

An Indian talk T.V. show 'Satyamev Jayate' was first premiered on 6th may 2012 on various channels within Star Network along with DD National. The Satyamev Jayate show is hosted by the famous Bollywood actor and film maker AmirKhan. Satyamev jayate is the first Indian show of such kind being based on facts rather than being fictional. Referred as a talk show discussing the social issues of the country, Satyamev Jayate is an appreciable initiative by Star Plus and is likely to change the social perspectives of people involved in various illegal and insane acts in the society.

Though, Satyamev Jayate is a Hindi show originally but it is also telecasted in various other languages to grab the attention of people of all strata of society. The show has been started with an objective to bring the attention of common people on various ongoing issues of the society such as dowry, child abuse, honor killing associated with love marriages and much more.

The topics like dowry, honor killing, female feticide, child sexual abuse, medical malpractices and disability have been discussed up till now. The issues discussed in the TV show have led to a social awakening but some issues raised during the discussions became the point of controversy for Amir Khan and his team. Med scape India, a body of 21 medical institutions, has asked Bollywood actor Amir Khan to apologize for "defaming" doctors on his TV show, " Satyamev Jayate, as the fourth episode was based on the malpractices of the doctors. The discussion has created a negative and insensitive image of doctors and hospitals in front of the public. Another controversy came into limelight after the 5th episode when Amir Khan raised the issue of honor killing and love marriages during his show and quoted Haryana Khap Panchayat by asking them 'whether they think they are bigger than the constitution of India?'. The same Khap Panchayat has blamed Amir Khan for painting an unholy picture of their views in front of the public; the members argued in return that what so ever they are doing is for the protection of their tradition and rituals.

In a very less span of time the show has gained much popularity in the country and has emerged as an eye opener for public against many social stigma that are somehow damaging the societal back bone of our country. Hosted by a known public figure, actor Amir Khan, Satyamev Jayate starts at 11 am every Sunday and has become the most awaited programs of television among the viewers.

People can share their views in respect to the matter taken out for them in the show regarding any issue. The opinions of public sitting at their homes are also asked based on their understanding to the issues discussed for whether they agree to the matter taken out or not. The audience can answer in 'Y' for 'Yes' and 'N' for 'No' at a minimal cost of Re 1 for sending SMS as per there view point.

The Satyamev Jayate T.V show of such kind was necessary to bring out the negative aspects of the society in front of the public which can possibly wash the minds of some people in relation to various social issues.

Special screening of the 1st telecast was organized in some villages of Gujarat, Maharashtra and Uttar Pradesh by Star Plus where the villages do not get proper access and rural recognition.

The Satyamev Jayate show is sponsored by Airtel and co-sponsored by Aqua guard. The other sponsors include Coca-Cola, Johnson & Johnson, Skoda Auto, Axis Bank, Berger Paints and Dixcy Scott. 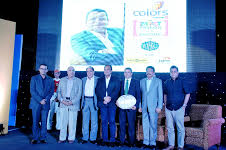 Uday Shankar wins the IMPACT Person of the Decade-2014 award