Everything you need to know about Haiti: news, reviews, in-depth analysis, opinion and more

Haiti: The Land of Mangroves

Columbus was the first explorer to come across this island in the year 1492. And then the indigenous people of Haiti, the Arawaks came under the control of Spanish colonizers. It then became a French colony in the year 1697. The French rulers used this region for the production of sugarcane and employed several slaves in the area. However, there was a mass insurrection by the native slaves and it was declared independent by Pierre-Dominique Toussaint l'Ouverture in 1801. Thereafter, the movement was suppressed by Napoléon Bonaparte, which again got started in the year 1804. Hence it became world’s first black nation to gain independence.

Haiti Geography, Climate and Economy:
Haiti is almost the same size of Maryland, and is mostly mountainous covering about two third of the total area. While the rest of the parts comprise of great valleys, extensive plateaus, and small plains. It consists of Hispaniola Island in the western end.

The climate of Haiti is tropical and the temperature varies according to different altitudes. In the months of November to March the temperature ranges from 23-32 degree Celsius and it is the best time to visit Haiti. In the months of May to July there remains a rainy season. Some areas experience semiarid climate where mountains act as a barrier for the trade winds.

Haiti is the most economically backward country in the Western Hemisphere. Around 80% of its population lives below the poverty line and 54% in utter poverty. Agricultural sector, mainly small-scale subsistence farming, forms two third part of its economy. The Natural resources of Haiti consist of bauxite, copper, calcium carbonate, gold, marble and hydropower.

Culture and Cuisine of Haiti:
Africa has had a major influence on this island as 95% belong to African origin while other groups comprise of Mulattoes. In all, Haiti has a rich culture comprising of delectable cuisine, music, architecture, painting and sculpture. The people of Haiti comprise of Voodoos with their distinct music and dancing styles. Kompa music of Haiti is famous for its vibrant style and in terms of genre it bears similarity with the music of Cuba.

The Haitian cuisine has major French and African influences, which also includes their cooking techniques. Staples like maize or mayi, yam and cassava form an important part of this island’s cuisine having African origins. Besides this it also shares some Latin American cuisine features.

Tourist Attractions in Haiti:
Labadie Island is one of the most popular places in Haiti attracting tourists from worldwide. It is famous for its scenic sites and the picturesque beaches and bays. Besides this, the Bay of Acul is famous for its reefs. The Musee de Guahaba is a museum in Haiti, which comprises of a number of artifacts and artworks depicting Haiti’s cultural background and historical relics.

Some Other Tourist Sites are: 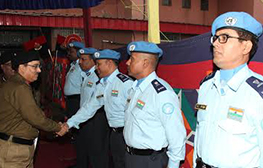 Washington, May 1 (IANS) When it comes to kindness or helping a stranger, atheists and agnostics fare much better than their highly religious counterparts.

Atheists more driven by compassion to help others than religious people

Washington, May 1 (ANI): Highly religious people are less motivated by compassion when helping a stranger than are atheists, agnostics and less religious people, a new research has revealed.

Angelina Jolie to take on diplomatic role at UN

London, Apr 18 (ANI): Angelina Jolie, who has been working at the UN refugee agency as a goodwill ambassador for the past ten years, has been promoted to special envoy to draw attention to some of the world's worse humanitarian disasters using her fame.

Santo Domingo, April 9 (IANS) At least 27 people have died in Haiti when a truck overturned after the driver lost control of the vehicle.

London, Feb 3 (ANI): Andrew Garfield recently travelled to Ethiopia after being appointed as the new ambassador of a global charity for orphans.

London, Feb 3 (ANI): Andrew Garfield recently travelled to Ethiopia after being appointed as the new ambassador of a global charity for orphans.

Washington, Jan 23 (ANI): Pamela Anderson is selling her 2007 Range Rover on eBay and will donate the entire money from the sale to Sean Penn's J/P Haitian Relief Organization.

Washington, Jan 19 (ANI): Sean Penn who is helping Haiti recover from the devastating earthquake has revealed that relief and building efforts are really starting to happen after an agonizingly slow start.

Washington, Jan 19 (ANI): Aspirin should be evaluated for its ability to prevent development of cervical cancer in HIV-infected women, a new study has suggested.

Washington, Jan 19 (ANI): Sean Penn who is helping Haiti recover from the devastating earthquake has revealed that relief and building efforts are really starting to happen after an agonizingly slow start.

Washington, Jan 19 (ANI): Aspirin should be evaluated for its ability to prevent development of cervical cancer in HIV-infected women, a new study has suggested.

Sean Penn made ambassador for Haiti

Washington, Jan 16 (ANI): Sean Penn has become an "ambassador at large" for the Caribbean nation of Haiti.

Sean Penn made ambassador for Haiti

Washington, Jan 16 (ANI): Sean Penn has become an "ambassador at large" for the Caribbean nation of Haiti.