Everything you need to know about NOKIA: news, reviews, in-depth analysis, opinion and more

Nokia Corporation founded in the last half of the Nineteenth century is the largest mobile and telecommunication company in the world. Its commercial network is spread to most of the countries of the world having a vast area of business. It is the largest company in Finland having a larger part to its economy. Nokia Corporation is a major employer in the world owing to its vast business market around the globe. The total cost of the corporation stands at $ 33.7 billion and is listed as 5th most valuable global brand and number one brand in mobile production in Asia, Europe and one of the most admirable companies in the world. Nokia 1st entered in to GSM handset market in 1990 and emerged fast leading to the current phenomenon of mobile communication. In the 1970s and 80s it entered in to telecommunications industry and personal computers respectively. In 2006 it plunged in to CDMA business and during that month it merged with Siemens to create largest network business in the world and subsequently occupied many companies to energize its business everywhere. To make it more developed Nokia Corporations has tied up with many universities to go through various research projects. Nokia also has services and software as its parts which work for online services, optics and streaming media. Nokia has gone another step ahead in providing internet services through Ovi.com for the advantages of the mobile users. 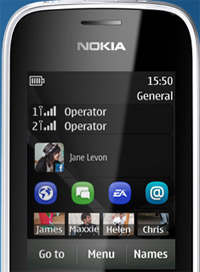 Nokia Asha 202 is a dual SIM touch and type phone that has been recently launched in India at the price of around Rs. 4, 000. 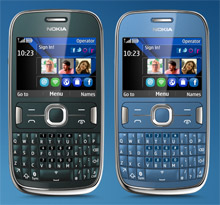 Nokia has launched Nokia Asha 302 mobile phone in India. It has a QWERTY keypad and is a 3G phone. Though it has not much to offer, Nokia has kept its price at around Rs. 6,200.