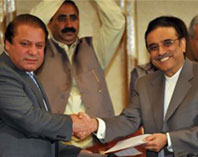 Last week was a time of great upheaval in the politics of Pakistan. The entire world watched Pakistan politics curiously. On all sides, the expectation was that Pakistan army can overpower the government any time. During the guesses, the discussions among the Prime Minister Yousuf Raza Gilani, President Asif Ali Zardari & Army Chief General Ashfaq Parvez Kayani went on continuously. There was even media speculation that due to the fear of overturn of rule, President Zardari has gone underground. At that time it seemed that the next moment, democracy in Pakistan will breathe its last and the army will retake charge of the government of Pakistan. Settling these rumours, it was later clarified from the President office that Zardari is in his residence and he is quite safe there.

The reason behind this upheaval in Pakistan seemed that the head of the Pakistan Muslim League (Nawaz), the former Prime Minister Nawaz Sharif was demanding the reinstatement of the former Chief Justice Iftikhar Choudhary and all other sacked judges; for that he was organizing a big long march towards Islamabad. Because of the present anarchy & terrorism in Pakistan, this march was considered unsafe and dangerous step. Anyhow the curtain dropped over this politics when on March 16 morning, Prime Minister Gilani announced that after the retirement of the present Chief Justice Abdul Hameed Donger on March 21, the sacked Chief Justice along with all the sacked judges will be reinstated & Choudhary would take charge as the next Chief Justice. Certainly politically it is being looked as a big victory for Nawaz Sharif & a political blow to President Zardari.

Before having a look at this incident, we need to have a glance over the political personae of Nawaz Sharif and Asif Ali Zardari. Sharif who was born in December 25, 1949 is counted among the big industrialists of Pakistan. He has always been active in the ground politics. Because of such political activism he twice became the Prime Minister of Pakistan in 1990 & 1997. At present he is chief of the PML (N). Whereas born in 1955, Asif Ali Zardari has fifth rank among the rich industrialists of Pakistan. But his introduction to politics was after his marriage to Benazir Bhutto on December 18, 1987. After his marriage, he began to play the political role. First of all, he was elected the member of national assembly for two times during 1990 to 1996. During this period, Zardari twice got chance to become federal minister in Pakistan. He remained senator during 1997 to 1999. His wife late Benazir Bhutto was too elected Prime Minister twice.

On December 27, 2007, when after an election meeting, Begum Bhutto was assassinated & her son Bilawal Bhutto Zardari was not politically mature enough to take the chair, Pakistan People’s Party with a sympathetic gesture made Zardari as the acting President of the Party. Here it is noteworthy that notwithstanding Zardari was made President on sympathetic grounds; people of Pakistan were unable to digest as he is the same Zardari who had to remain in jail for many years on charges of corruption. He was also notorious as Mr. Ten Percent. Anyhow Sharif and Bhutto two big leaders of Pakistan & away from Pakistan, who were fed up because of rule of General Pervez Musharraf, got united against the dictatorship of Musharraf & signed in 2006, a ‘Charter of Democracy’. Mainly in it there were three points over which work was to be done, that were signed between Sharif & Bhutto. First was to establish Democracy in Pakistan, at all costs. Second was to remain away from mutual confrontation. And third was to end the role of army in the politics of the country.

Here one thing is necessary to tell about the Pakistan People’s Party & Pakistan Muslim League (Nawaz) that in Pakistan these two parties are just as in India, there are Congress & the Bharatiya Janata Party. Just as these two parties never stand together in India, similarly in Pakistan, both the PPP & the PML (N) are poles apart. It was the ‘marvel’ of the Musharraf that brought together both of these parties having opposite ideologues & made them stand on one Platform. The platform was to free the country from the grip of the army or Musharraf & restore democracy in the country. But during the election process & after the assassination of Benazir Bhutto, the political equations seemed to have changed clearly. After the killing of Bhutto & because of the sympathetic wave, even Nawaz Sharif said her as his sister. In fact such a statement by Sharif was because of the circumstances & not based on reality. So just after a little hesitation & moulding himself according to circumstances, he accepted Zardari as the 11th President of Pakistan. But it may either be India, or Pakistan, the politicians are always in search of opportunities in the democratic setup.

Circumstances made Zardari, the President of the country. But the terrorism was continuously increasing during that time. Taliban was strengthening itself. The suicide attacks were increasing. The power of the Taliban increased to the extent that they set a depot of the NATO forces on fire. During this anarchy in Pakistan, the time was full of ashamed for Pakistan government when on March 3; the cricket team of Sri Lanka in Pakistan was attacked in daylight by 12 terrorists. This incident compelled the President & the Prime Minister to feel ashamed before the world. On the other hand, America was putting pressure on Pak government that it must try to control the continuously deteriorating situation as early as possible.

Obviously, a clever, matured politician as Nawaz Sharif couldn’t let a chance go out of his reach. Nawaz Sharif, at once, struck hot iron. To march towards Islamabad & reinstatement of sacked judges by Musharraf was merely an issue. Actually, Sharif wanted to give a big political blow to Zardari. Sharif wanted to show that there is no one in the country to compete with him in politics of Pakistan. Now the assumptions are that after March 21, after the reinstatement of sacked judges, Sharif will get credit & power in judicial setup at the same time. Zardari will feel politically small before Sharif. There are Speculations that soon in future Prime Minister Yousuf Raza Gilani may play a political game along with Nawaz Sharif so that Zardari is relieved from the President office. Anyhow, at present the happy news for the world is that Pakistan, once again, escaped from the clutches of the army.

The author is a columnist based in India. He is related with hundreds of most popular daily news papers/portals in India and abroad. Jafri, almost writes in the field of communal harmony, world peace, anti communalism, anti terrorism, national integration, national & international politics etc. He can be reached at: tanveerjafriamb@gmail.com