"Ladies Only": A Response to Nature's Call 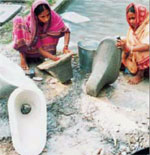 Up until five years ago, every monsoon, the little tribal village of Gothangaon, would use up the entire stock of diarrhoea and gastroenteritis medication issued to the Adegaon Panchayat (village council) to which it is linked. But in the last five years, the number of cases in the village of these two ailments have dropped to nearly zero.

The reason? A block of seven toilets constructed on 150 sq. ft. of land. Built at the initiative of the women of the village, the toilets are cleaned, maintained and used only by women. Apart from gastroenteritis and diarrhoea, a host of health problems faced by the women of the village have also been solved because of this toilet block.

Gothangaon, a tiny village of 70 households located in the Nagpur district of Maharashtra, had the disadvantage of not having any village commons. Traditionally, such common areas are used as a safe defecation site, apart from other purposes. However, in Gothangaon some 70 years back, oustees from the nearby Bor dam project were resettled on the common land of the village. Consequently, the village is surrounded on all sides by farms and thick forests.

Predictably, this loss of commons has hit the women the hardest. Says Anjeerabai Salam, a resident, "The men started going deep into the forest to defecate, but for the women and children the situation was very difficult. We had to defecate very close to the village; we neither had any privacy, nor could we ensure proper hygiene."

As a result, not only did the cases of water-borne diseases go up, the women also began to suffer from hygiene-related afflictions and other problems. "Every woman in the village used to suffer from constant cramps in the stomach and back," recalls elderly Bakubai Atram. "It was because we could not defecate when we needed to. If we had the urge to relieve ourselves during the day we would wait till noon when there was no one about. If we wanted to go in the night, we would wait till dawn."

The situation changed in 2003, when Samata Homoeo Society (SHS) started constructing school toilets in several villages in the area. "We women approached the organisation with our problem," says Mandabai Salam, president of the SHG cluster in the village, "and asked them if we could have some toilets constructed for women, apart from the school toilets."

After initial hesitation, Dr N.S. Sawarkar, president of the society, generated Rs 160,000 (US$1=Rs 48.75) for the project by cost-cutting on the school toilets - four of which were also constructed in Gothangaon. However, the biggest problem was the 150 sq. ft. piece of land required for the construction of toilets.

Here, Jhingubai Sambhaji Salam, an elderly matriarch, came to the rescue. She donated the required patch of land out of her agricultural land located close to the main street in the village, free of cost. "The land is worth Rs 20,000 by current market prices," says a cheerful Jhingubai, with justifiable pride, "I donated it because I too have six grown up daughters."

Soon a small complex of seven toilets was constructed on this land for the exclusive use of village women. "We kept our distance from concepts like low-cost toilets," says Mandabai, "We have seen such toilets in nearby villages - they are easily damaged and do not last."

The women decided to go for durable construction, so that the toilets were of the same quality as those found in city homes. The money generated by SHS was used to procure construction material, while the villagers contributed labour worth Rs 26,000. Finally the toilets were completed. Water supply for them was obtained from the village water supply pipeline, and two tanks - one overhead, and one at the ground level - were constructed to store water.

The next problem was that of maintenance. It was decided that half the women would use the school toilets while the rest would use the toilets on Jhingubai's land, and contribute a maintenance cost of five rupees per family per month. This money is used to buy cleaning material, buckets and dippers and to carry out minor repair works as and when required. The actual job of cleaning the toilets was to be done in turns by all the women in the village - in groups of five.

So far the system has worked very well. The small monthly fee was soon replaced by the practice of collecting Rs 50 per year per family for the purpose of administrative convenience. It was also decided to keep the toilets locked during the two hot summer months of April and May, when water supply is insufficient for the toilets to run effectively. "We are trying to find a way to run the toilets during summer too, but haven't been successful yet," says Anjeera Bai.

The construction of the toilets has brought a phenomenal change in the health situation in the village. In the last five years, hardly any case of gastroenteritis or diarrhoea has been reported. The Chikungunya epidemic of 2006, which affected every other village in the area, left Gothangaon untouched.

The toilet success story is not, however, entirely without its down side. A few months ago, an altercation arose over the use of the school toilets, as a few families had begun to monopolise them by keeping them locked. One morning after a particularly heated exchange, the toilet seats were found broken and two doors wrenched off the hinges. No one knows for sure who did it but the toilets have been locked since then, as there are no funds for the repair work. Today, all women are using the other toilet complex.

A second problem is that since the toilets are available only for the women, the men in the village are feeling left out. Some 18 months back, in a 'gram sabha' (village council) meeting the men demanded that two of the seven toilets be reserved for them. The women vocally opposed this proposal. "We can't have men and women using the same set of toilets," says Manjula Bai Sarve, "It would create a privacy problem. We insisted that separate toilets should be constructed for men."

This has not been possible so far because of a lack of both funds and space. Therefore the deadlock between women and men over the use of the toilets continues. But one positive outcome has been that because the women have firmly refused to part with their toilets, the men have been spurred to discussing the problem more seriously. They have even started studying government schemes for toilet construction.

"If they look hard enough they will find a solution sooner or later," says Jhingubai, who has categorically refused to donate more land for men's toilets, "The women have taken initiative and worked for these toilets. Why should men get any of them for free?"