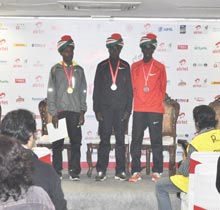 It was a chilly Sunday in Delhi; still Delhiites came out in full support for Airtel Delhi Half Marathon. Lelisa Desisa of Ethiopia and Kenyan Lucy Kabuu won the title for men’s and women’s overall titles respectively.

With all lime light in the presence of some of the top most world athletes, Kenyan duo of Geoffrey Kipsang and Mike Kigen finished second and third respectively. Desisa covered 21.097 km in 59 minutes and 30 secs to receive the gold medal and $25,000 as winner.

Kenyan Kabuu won the race in an hour, seven minutes and four seconds while Sharon Cherop settled for silver in 1:07:08s. As far as Indian participants are concerned, Suresh Kumar finished in the overall 20th spot (1:04:06s).

In the women’s section, Lalita Babbar successfully defended her title as the fastest among Indian women participants in 1:17:37s. The event was flagged off from the main venue - Jawaharlal Nehru stadium by Hindi film industry superstar Shah Rukh Khan.
The 46-year-old actor, addressing media persons after the event, said India needed to cultivate a culture of sport where youth could consider it a viable career choice.

"I think India should be inspired. Delhi is fantastic, whether it was the F1; there are a lot of people who come out in numbers, whether it's the half marathon today. I think it's very important that all of us appreciate that sports needs to be something that we encourage and promote. It should be a profession for children," he further added.

Speaking to an all together different level, Khan also said that companies must add sports to their corporate social responsibility. Bollywood actress Bipasha Basu, who was also present at the event, said that the Delhi Half Marathon was a celebration of the city that brought people from different walks of life to a common platform.

Certainly Delhi’s half marathon, India’s largest is also proclaimed as world’s richest half marathon. Since its inaugural year back in 2005, the race has made its mark among the top global sporting event.

Overall, 8,368 participants ran the 21.097 kms half marathon distance while the 7km Great Delhi Run was participated by 21,095 people. In addition, 4.3km senior citizens run registered a total of 815 participants and the 2.5 km wheelchair event had 43 cheerful competitors. In the end, it’s the winner Desisa of Ethiopia and the overwhelming enthusiasm of Delhiites that made the run memorable for all.