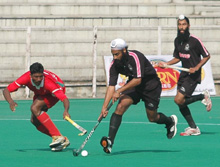 Nehru Champion Challenges College title winner DAV College, Jalandhar, who proved their superiority few days back at the same venue couldn’t be able to carry on their good touch as they meekly surrendered against their tough opponents Army XI team.

Army XI trounced Jalandhar outfit by a margin of four goals in the knock out qualifying match to make the grade into the quarter-final league of the 4th Oriental Bank Maharaja Ranjit Singh Hockey tournament at the Shivaji Stadium here on Tuesday.

The Jalandhar team showed some resistance against their sturdy rivals in the first half, but lost the plot of the game in the latter half as they conceded as many as four goals to end up on the losing side.

The electrifying first half saw some fine moves from both the sides. Jalandhar boys produced some fine energetic forays into the rival citadel right from the start but couldn’t get past the rival’s tight defence.

Both the teams tried their hard to surge ahead but could not be able to open their account. It was clear evident from the game that Army XI has got superior physical fitness in comparison to its young opponents. Both the teams went goalless in to the breather.

On changing the ends, Armymen changed their strategy and initiated back-to-back attacks in the rival camp. The DAV boys, however, lost their stamina till that time and it was appearing that they were feeling the heat to match up their opponents physically.

The Jalandhar boys failed to keep up the first-half momentum as Army XI broke the deadlock in the 44th minute. The heartening aspect of the Army team was that they struck their initial three goals after converting short corners.

Rajesh Lakra struck the first goal with a powerful hit that went past rival custodian Jaswinder Singh. Lakra soon doubled the lead with another powerful strike.

The DAV team made some hard efforts to bounce back into the match but luck denied them chances on more than two occasions. Army custodian Rao came to the fore to defy Jalandhar team two sure goals. Rao while finely padded away Sanjeev Kumar’s feeble shot on one occasion while thwarted Major Singh's shot from handshaking distance.

D Mahadik scored Army team's third goal that also came via penalty corner. Mahadik scooped the ball straight into the net beating goalkeeper all ends ups. Mahadik once again came in to the thick of action as he belted the final blow, making the scoreline 4-1, with a fine field goal in the closing stages of the match to seal the fate of the opponents.