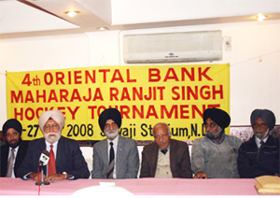 The fourth edition of the prestigious Oriental Bank Maharaja Ranjit Singh hockey tournament commences today with the nation’s premier teams will be vying to claim the top honours of the championship for over a week’s time at the capital’s Shivaji stadium.

The tournament will be played on league-cum-knockout basis with the final of the tournament scheduled on February 18. The tournament carries hefty prize money of Rs, 1,25,000 for the winners while a sum of Rs 75, 000 will be awarded to the runners-up.

In its bid to raise the standard of Indian hockey, the managing committee of the tournament has raised the purse of winners and runners-up by Rs 50,000 from this year onwards. In addition, an amount of Rs 20,000 will be given to losing semifinalists.

A cash prize of Rs 7,000 will be given to the man of the tournament, named after legendary Major Dhyanchand, apart from a likely sum of Rs 4000 to the recipient of man of the match of each game.

While addressing the mediapersons at the press meet, Lt. General Bhullar, also said that the country had no hockey icons after legendary Major Dhyanchand but three were lot of players who had done a lot to bring laurels for the country in the game of hockey.

Therefore the tournament committee has instituted five special awards in the name of yesteryear hockey stalwarts to recognize their services and to pay homage to them. All of them were Olympians.

It is also an attempt by the Maharaja Ranjit Singh Trust to bring alive the memories of these past players for the current crop who don’t even know about these great players.

The awards have been named after Late Shankar Laxman Late Prithpal Singh Late Mohinder Lal and Late Udham Singh for best goalkeeper, best full back, best half back and best forward of the tournament respectively. The four awards carries cash prize of Rs 5000.

A special award of Rs 5,000 for the promising umpire of the championship will also be given which is named after renowned international hockey umpire Late Sh. Gyan Singh.

According to the Organising Secretary, Brigadier Harinderjit Singh Chimni, The competition level among the teams of the tournament was so close and high that the last year runners-up Indian Oil Corporation (IOC) couldn’t be able to make the cut for the league phase and they will have to play knock-out qualifiers to make the grade.

IOC will be pitted along with Army XI, Northern Railway, Sikh Regimental Centre (SRC), Ramgarh and DAV College, Jalandhar team, who has been given entry after they conquered just concluded Nehru Champion colleges’ hockey tournament, for the qualifiers.

“The showers of cash prizes for the players is really a good move as it will raise the standard of hockey in the country and specially in the direction of its overall upliftment which has been clouded after a glorious past,” feels triple Olympian Harbinder Singh.

A look back to the Maharaja Ranjit Singh hockey tournament

The prominent tournament of late seventies, started way back in 1967 in Amritsar, named after great Maharaja Ranjit Singh of Punjab. The tournament got much recognition across the country in a very short span of time and was among the Grade ‘A’ tournament of the Indian Hockey Federation (IHF), but to its disappointment the tournament got shelved in the year 1984 during insurgency in Punjab.

Both of them started from the scratch and took the tournament to greater heights after implementing new schemes and policies year by year.