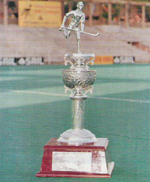 The match had a flying start as Ameet Bhargav’s reverse hit came off the post in the very first move denying Bhopal team a possible goal. The luck was surely not riding on Bhopal’s side as they wasted as many as eight short corners, four in each half, as compared to Jalandhar’s three.

Eight time champions Jalandhar boys got off the blocks gradually as they more relied on counters initially. But when they started the assault there were no stopping of them. Jujhar Singh alongwith Ajay Kumar and Major Singh were so menacing on the upfront as rival defenders had no clue of preventing them.

Jalandhar team took the lead (1-0) in the 19th minute through a fine deflection by Ajay Kumar on a fine cross by Lakhwinder Singh from the left flank. From thereon the DAV team never looked back as they launched flurry of attacks in the rival’s danger area giving no time to them to settle.

Ajay Kumar doubled the lead (2-0) ten minutes later with a gentle push from the hand shaking distance after all the hard work done by Jujhar Singh, who dogged past half of the Bhopal side inside the striking circle before setting it up for Ajay.

It seemed that the Jalandhar team had a stranglehold on the match. But all of a sudden Bhopal’s team swift forward Satish Kumar Lama struck a lightening goal three-minute before half-time to make it 2-1.

Lama snatched the ball on the striking circle from a defender and unleashed a stinging shot that went past the diving goalkeeper sounding the board. The Jalandhar boys were leading 2-1 at the stroke of lemon break.

On resumption, Jalandhar outfit came out with much fire in their belly as they pumped in their third goal three minute into the second half through Major Singh who beat the rival custodian with a deft dodge after receiving a pass from Jujhar Singh.

However, Bhopal's Lama kept the fighting spirit going and pulled back one more a minute later with a fine angular shot to reduce the margin (2-3) that went past like a bullet keeping Jalandhar goalkeeper stranded.

Jalandhar boys had not panicked by any means after conceding a goal, as their aim was to score more goals and they further surged ahead in the 44th minute. Jujhar Singh outmaneuvered the Bhopal custodian to sound the board (4-2).

Bhopal custodian Mehboob Khan had a bad day in the office and wasn’t looking comfortable under the post as he made some silly mistakes. Nisar Khan changed him in the 48th minute but that made not much of a difference.

Jujhar and Major Singh combined well again in the 53rd minute with the former slotted one more through a sharp reverse hit to belt the final nail in the coffin, sealing the fate of the opponents.

The champions received a purse of Rs 96,000 and a glittering trophy from Chief Guest, Minister of State for Heavy Industries and Public Enterprises, Ms. Kanti Singh.

The Lyallpur College also got richer by Rs 20,000 after being rewarded for converting maximum penalty corners in the competition.

DAV coach, Gundeep Singh, was presented Rs. 8,000 while the coaches of the runner-up Bhopal’s side M. Hasan and the third placed-team Avtar Singh were given Rs. 5,000 and Rs. 3,000 respectively.