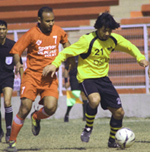 In the opening encounter of the day current DSA senior division league champions Osian’s ND Heroes, who were initially looked rusty, put up a spirited performance in the latter half to get past defending champion Punjab Police by margin of two goals.

After barren first half Heroes team broke the deadlock in the 64th minute through agile Shariyat Raza. Raza got the perfectly placed nodder in to the net to take his team ahead on a corner from Bangupudia.

Punjab police tried their hard to stage a comeback into the match but their efforts went in vain. Jalandhar outfit were never looked in to its element, as they showed no signs of resistance as they hardly troubled its rivals.

Osian’s famed coach Chima Okerie came out with his trump card ten minutes before the final whistle when he substituted Palte with striker Harrison that paid dividend in the end.

The Nigerian striker, however, received a booking for showing dissent against an off side decision but the lanky striker did fine to strike the final nail in opponent’s coffin by unleashing a stinging 30-yard shot in the dying moments.

The Police custodian stranded at the goal line like a spectator, watching the ball on to the net. The shot went past to far post providing Heroes an impregnable 2-0 lead.

In the second game of the day, BSF, Jalandhar edged past Walled city favourites Indian Nationals 1-0 riding on a 65th minute goal by Harpreet Singh, which eventually sealed the fate of the local outfit.