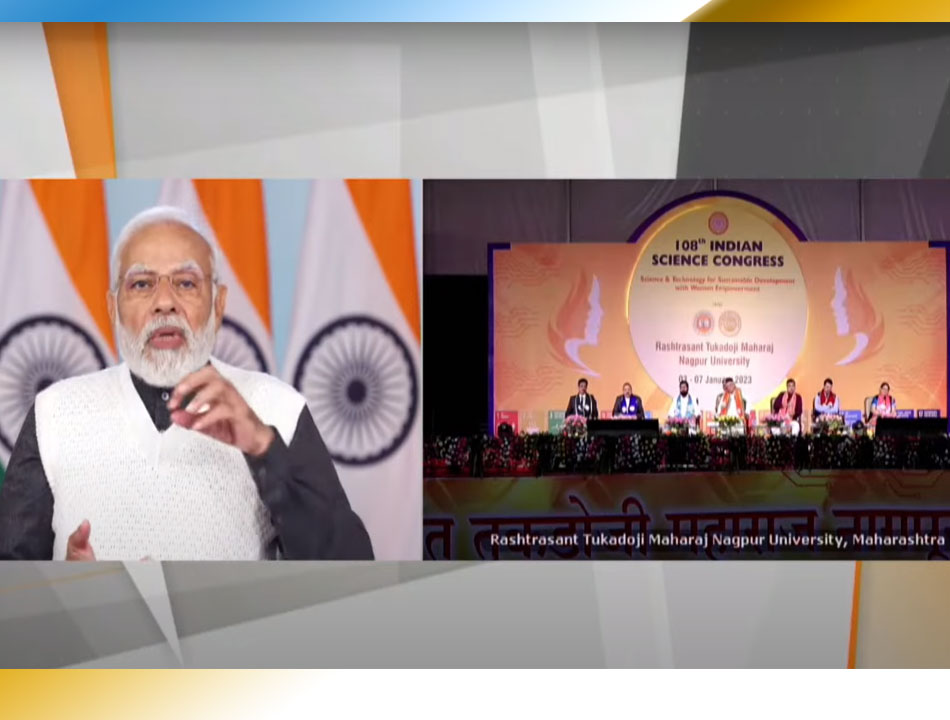 The Prime Minister, Shri Narendra Modi addressed the 108th Indian Science Congress (ISC) via video conferencing today. The focal theme of this year's ISC is “Science and Technology for Sustainable Development with Women Empowerment” which will witness discussions on issues of sustainable development, women empowerment and the role of science & technology in achieving this.

Addressing the gathering, the Prime Minister highlighted the role of India’s scientific strength in India’s story of development over the next 25 years. “When the spirit of national service gets infused in Science along with passion, results are unprecedented. I am sure, India’s scientific community will ensure a place for our country of which it was always deserving ”, he said.

Pointing out that observation is the root of science, and it is by such observation that scientists follow patterns and arrive at required results, the Prime Minister mentioned the importance of gathering data and analysing results. He highlighted the abundant availability of data and technology in 21st-century India and said that it has the potential to take Indian Science to new heights. He also informed that the field of data analysis is moving forward at a meteoric pace which is of great help in converting information into insight and analysis into actionable knowledge. “Be it traditional knowledge or modern technology, each one plays a crucial role in scientific discovery”, the Prime Minister remarked. He also emphasised the need to strengthen the scientific processes by applying various techniques of research-led development.

Speaking about the result of India’s tryst with the scientific approach, the Prime Minister said that India is being counted among the top countries of the world as India moved to  40th place in the Global Innovation Index in 2022 from 81st place in 2015. India is among the top three nations in the world in terms of the number of PhDs and startup ecosystems.

Expressing happiness about the theme of the Science Congress this year which combines sustainable development with women empowerment, the Prime Minister emphasised the complementarity between the two areas. However, he stressed, “Our thinking is not just that we should empower women via science but also empowering science by the contribution of women.”

Informing that India has been enshrined the opportunity to preside over G-20, the Prime Minister pointed out that women-led development is one of the high-priority subjects taken up by the chair. He informed that in the last 8 years, India has taken up extraordinary tasks ranging from governance to society to economy which is being discussed all over the world today. Highlighting the women who showcase their strength to the world, be it in a partnership in small industries and businesses or leadership in the start-up world, the Prime Minister gave the example of Mudra Yojna which has been instrumental in empowering women of India. He also pointed out the doubling of women’s participation in the field of extramural research and development. “The increasing participation of women is proof that women and science are both progressing in the nation”, Shri Modi said.

Talking about the scientists’ challenge of turning knowledge into actionable and helpful products the Prime Minister said, “Efforts of science can turn into great achievements only when they come out of the lab and reach the land, and their impact reaches from global to grassroots, when its ambit is from journal to jameen (land, everyday life) and when change is visible from research to real life.” He said when science’s achievements complete the distance between experiments to people’s experiences, it gives an important message and impresses the young generation who get convinced of the role of science. In order to help such youth, the Prime Minister emphasised the need for an institutional framework. He called upon the gathering to work on developing such an enabling institutional framework. He gave examples of Talent Hunt and Hackathons through which children with scientific temper could be discovered. The Prime Minister talked about India’s stride in the field of sports and attributed the success to the emerging robust institutional mechanism and guru-shishya parampara. The Prime Minister suggested that this tradition can be the mantra of success in the field of science.

Pointing out issues that will pave the way for the development of science in the nation, the Prime Minister remarked that fulfilling India’s requirements should be the root of all inspiration for the entire scientific community. “Science in India should make the country atmanirbhar”, the Prime Minister remarked as he noted that 17-18 percent of the human population resides in India and such scientific developments should benefit the entire population. He emphasised the need to work on subjects that are of importance to the entire humanity. To address the growing energy needs of the country, the Prime Minister informed that India is working on a National Hydrogen Mission and stressed the need to manufacture critical equipment like electrolysers in India to make it a success.

The Prime Minister also emphasised the role of the scientific community in developing ways of dealing with emerging diseases and the need for encouraging research in developing new vaccines. He talked about integrated disease surveillance for the timely detection of diseases.  For this, he stressed the need for coordinated efforts of all the ministries. Similarly, LiFE i.e Lifestyle for Environment movement may greatly be helped by the scientists.

The Prime Minister noted that it is a matter of pride for every citizen that on India’s call, the United Nations has declared the year 2023 as the International Year of Millets. He pointed out that work can be done to improve India's millets and its use while effective steps can be taken by the scientific community to reduce post-harvest losses with the help of biotechnology.

The Prime Minister underlined the role of science in waste management as municipal solid waste, electronic waste, bio-medical waste, and agricultural waste are expanding and the government is promoting a circular economy.

The Prime Minister acknowledged the role of low-cost satellite launch vehicles in the booming space sector of India and mentioned that the world will come forward to take our services. The Prime Minister highlighted the opportunities for private companies and startups by associating with R&D labs and academic institutions. He also pointed out quantum computing and how India is making its mark in the world as a quantum frontier. “India is moving fast in the direction of quantum computers, chemistry, communication, sensors, cryptography and new materials”, the Prime Minister said as he urged young researchers and scientists to gain expertise in the quantum field and become leaders.

Shri Modi stressed the need to focus on futuristic ideas and areas where no work is happening anywhere. He asked for keeping AI, AR and VR as priorities. He exhorted the scientific community to come up with innovations in the semiconductor chips and asked them to think about keeping the semiconductor push future ready from now on.  “If the country takes initiative in these areas we will be in a position to lead Industry 4.0”, he said.

Concluding the address, the Prime Minister expressed the belief that a clear roadmap for the future will be prepared on various constructive points during this session of the Indian Science Congress. “In Amrit Kaal, we have to make India the most advanced laboratory of modern science”, Shri Modi concluded.

The focal theme of this year's ISC is “Science and Technology for Sustainable Development with Women Empowerment”. It will witness discussions on issues of sustainable development, women empowerment and the role of science & technology in achieving this. The participants will discuss and deliberate on ways to increase the number of women in higher echelons of teaching, research and industry, along with trying to find ways to provide women with equal access to STEM (Science, Technology, Engineering, Mathematics) education, research opportunities and economic participation. A special programme to showcase the contribution of women in science and technology will also be held, which will also witness lectures by renowned women scientists.

The first session of the Indian Science Congress was held in 1914. The 108th annual session of ISC will be held at Rashtrasant Tukadoji Maharaj Nagpur University, which is also celebrating its centenary this year.