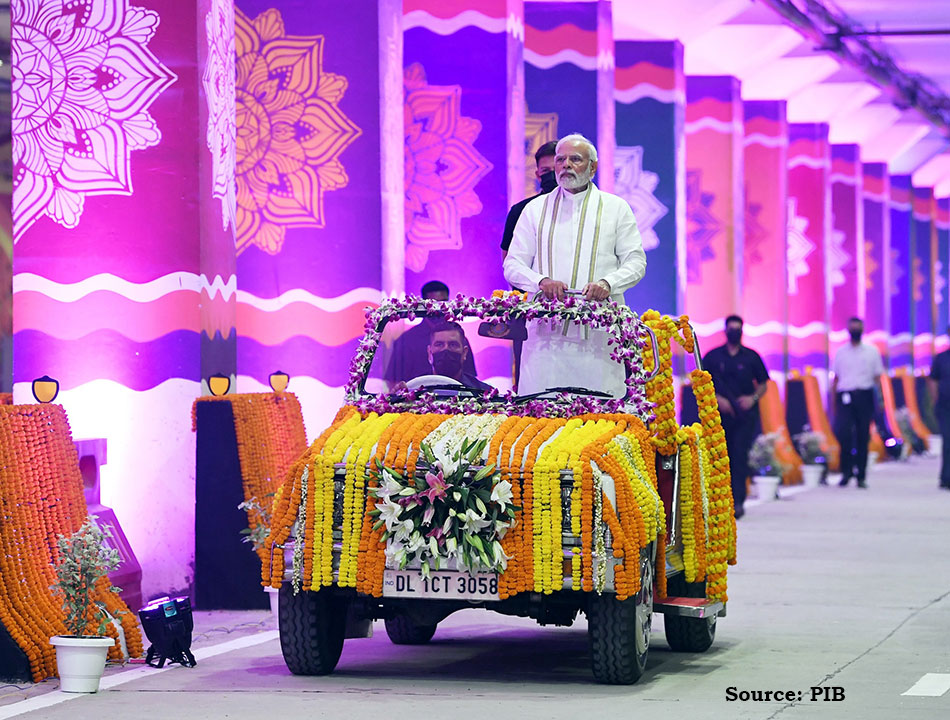 Addressing the gathering, the Prime Minister called the project a big gift from the central government to the people of Delhi. He recalled the enormity of the challenge in completing the project due to the traffic congestion and the pandemic. He credited the new work culture of New India and workers and engineers for completing the project.  “This is a New India that solves the problems, takes new pledges and works tirelessly to realize those pledges”, the Prime Minister said.

The Prime Minister said that this tunnel is part of the campaign to transform Pragti Maidan according to the needs of the 21st Century. He lamented the fact that despite changing India, Pragti Maidan which was created to showcase India got lagged behind due to lack of initiative and politics. “Unfortunately there was not much ‘Pragati’ (progress) of the Pragati Maidan”, he said. Despite a lot of fanfare and publicity earlier, this was not done. “The Government of India is working continuously for state of the art facilities, exhibition halls for world class events in the capital of the country”, he added by talking about such establishments like the International Convention and Expo Centre in Dwarka and the redevelopment project in Pragati Maidan. “Modern infrastructure developed by the central government is changing the picture of Delhi and Making it modern. This change in picture is a medium of changing destiny also”, he said. This focus on modernization of infrastructure is driven by increasing ease of living for the common people. He also reiterated the need for environment sensitive and climate conscious infrastructure development.  The Prime Minister gave the example of New Defence Office Complex at the Africa Avenue and Kasturba Gandhi Road as an illustration for the attitude of dealing proactively with long pending problems, environment friendly construction and care for those who are working for the country. He also expressed satisfaction that the Central Vista project is moving rapidly and said that in the coming days the capital of India will be a topic of discussion globally and a matter of pride for Indians.

The Prime Minister talked about the great benefits that will accrue from the integrated corridor in terms of saving of time and fuel, 55 lakh litre as per one estimate,  and also decongestion of traffic leading to environmental dividend, equivalent to planting 5 lakh trees. He said these permanent solutions to enhance ease of living are the need of the hour. The Prime Minister said “in the last 8 years, we have taken unprecedented steps to solve the problems of Delhi-NCR. In the last 8 years, the metro service in Delhi-NCR has expanded from 193 km to 400 km, more than double.” He asked people to develop a habit of using the metro and public transport. Similarly Eastern and Western Peripheral expressway, Delhi-Meerut expressway have helped citizens of Delhi a great deal. Referring to his conversations with the citizens and other stakeholders at the Kashi railway station, the Prime Minister said that there is a great change in the mindset of the common man and the government is making all the effort to keep working according to that change.  He pointed out that Delhi-Mumbai Expressway, Delhi-Dehradun Expressway, Delhi-Amritsar Expressway, Delhi-Chandigarh Expressway and Delhi-Jaipur Expressway are making Delhi one of the best connected capitals of the world. He also talked of Delhi Meerut Rapid rail system made by indigenous technology as part of the measures that are cementing Delhi’s identity as capital of India and will benefit the professionals, common people, students, youth,  School and office going commuters, taxi- auto drivers and business community.

The Prime Minister said that the country is creating multimodal connectivity through the vision of PM GatiShakti National Master Plan. PM GatiShakti National Master Plan is a medium of Sabka Vishwas and Sabka Prayas, he said. The Prime MInister conveyed his happiness about the adoption of GatiShakti by states as he was briefed in the recent Chief Secretary Conference in Dharamshala.  He emphasized that during the ‘Amrit Kaal’, “it is necessary to expand the scope of metro cities of the country and work with better planning in Tier-2, Tier-3 cities. For India's rapid development in the coming 25 years, we need cities to be made green, clean and friendly.” The Prime Minister said “if we take urbanization as an opportunity rather than a challenge, then it will contribute to the manifold development of the country.”

For the first time, the Prime Minister emphasized that any government is giving importance to urban planning on such a large scale. Work is being done to provide better facilities to everyone, from the urban poor to the urban middle class. In the last 8 years pucca houses to more than 1 crore 70 lakh urban poor have been ensured. Lakhs of middle class families have also been given help for construction of their house. If the focus is on modern public transport in cities, then CNG based mobility and the infrastructure of electric mobility is also being prioritized. The FAME scheme of the central government is a good example of this, the Prime Minister added.

The Prime Minister, who walked the tunnel leaving the vehicle, said that the artwork in the tunnel has shown value addition beyond the planned work and is a great study centre of Ek Bharat Shreshth Bharat. He said, perhaps, this is among the longest art galleries anywhere in the world. He suggested that it may be explored that on Sundays for a few hours the tunnel should be kept exclusively for school children and pedestrians to appreciate the artwork and the spirit that it embodies.

Details of the Project:

The  Pragati Maidan Integrated Transit Corridor project has been built at a cost of more than Rs. 920 crore, entirely funded by the Central Government. It is aimed to provide hassle free and smooth access to the new world class exhibition and convention centre being developed at Pragati Maidan, thereby facilitating easy participation of exhibitors and visitors in the programmes being held at Pragati Maidan.

The impact of the project, however, will be much beyond Pragati Maidan as it will ensure hassle-free vehicular movement, helping save time and cost of commuters in a big way. It is part of the overarching vision of the government to ensure ease of living for people through transforming urban infrastructure.

The main Tunnel connects Ring Road with India Gate via Purana Qila Road passing through Pragati Maidan. The six lane divided Tunnel has multiple purposes, including access to the huge basement parking of Pragati Maidan. A unique component of the Tunnel is that two cross tunnels below the main tunnel road have been constructed in order to facilitate movement of the traffic from either side of the parking lot. It is equipped with the latest global standard facilities for smooth movement of traffic such as smart fire management, modern ventilation and automated drainage, digitally controlled CCTV and Public Announcement system inside the Tunnel. This long-awaited Tunnel will serve as an alternative route to Bhairon Marg, which is running much beyond its carriage capacity and is expected to take more than half of the traffic load of Bhairon Marg.

Along with the tunnel, there will be six underpasses – four on Mathura Road, one on Bhairon Marg and one on the intersection of Ring Road and Bhairon Marg.