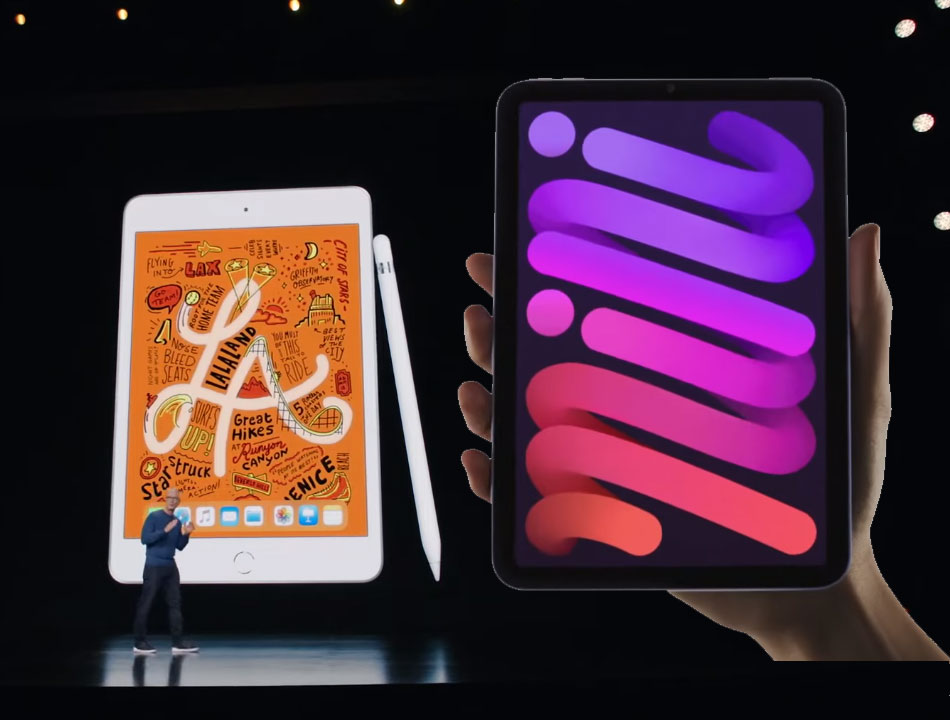 Apple concluded its “California Streaming”, which was its annual launch event. The company along with its new iPhone 13 has also released the new iPad Mini and also a new series of Apple Watches.

The new iPad mini comes with a larger 8.3-inch Liquid Retina display, featuring the new A15 Bionic chip, delivering up to 80 per cent faster performance than the previous generation.

In terms of performance, the 6-core  CPU delivers a 40 per cent jump in performance, and the 5-core GPU delivers an 80 per cent leap in graphics performance compared to the previous generation of the iPad mini. The new iPad mini with the new A15 bionic handles even the most demanding tasks, from graphically rich games to pro apps used by designers, pilots, doctors, and more. Advanced machine learning (ML) functions are powered by a 16-core Neural Engine and new ML accelerators in the CPU, which can now deliver 2x faster ML tasks than its predecessor.

The new iPad mini comes in pink, starlight, purple, and space grey. The larger 8.3-inch Liquid Retina display with narrow borders. With advanced technologies such as 500 nits of brightness, a P3 wide colour gamut, anti-reflective screen coating, True Tone, and full lamination, images and video are supposed to be more vibrant. While new landscape stereo speakers, combined with the new display, deliver a great movie-viewing experience. The all-screen design is enabled by moving Touch ID to the top button of the iPad mini.

The Centre Stage which was previously only available on the iPad Pro is not available on the iPad mini, allowing users to enjoy even more engaging video calls. The iPad mini hosts an updated Ultra Wide front camera with a new 12MP sensor and a much larger field of view enabling Centre Stage. The back camera is a 12MP sensor with Focus Pixels and a larger aperture to capture sharp, vivid photos.

The new iPad now features a new USB-C port for up to 5Gbps data transfer, which is 10x faster than the previous generation and connects to a vast ecosystem of USB-C accessories, including cameras and external storage and displays up to 4K.

The Wi-fi models of iPad mini are available with a starting price of INR 46900 and Wi-Fi + Cellular models start at INR 60900. The new iPad mini, in 64GB and 256GB configurations, comes in pink, starlight, purple, and space grey finishes.

Additionally, Apple also released the new iPadOS 15, which is to enhance the iPad experience. In its upgrades, it includes New widget layouts for the Home Screen and App Library, systemwide notes with Quick Note. The Translate app comes to iPad with new features that make conversations easier and more natural, including Auto Translate and face-to-face view. Focus lets users automatically filter notifications based on what they’re currently doing, such as working, reading, exercising, playing games, or sleeping.

According to Apple, the new iPhone is designed to minimise its impact on the environment, including antenna lines that use upcycled plastic water bottles that have been chemically transformed into a stronger, high-performance material. iPhone 13 also uses 100 percent recycled rare earth elements in magnets like those used in MagSafe, 100 percent recycled tin in the solder of the main logic board and, for the first time, in the solder of the battery management unit. All the models also use 100 percent recycled gold in the plating of the main logic board and the wire in the front camera and rear cameras. Apple has also redesigned its packaging, which removes the outer plastic layer. The redesign allows the company to avoid 600 metric tons of plastic, a step forward in its goals towards completely removing plastic from all packaging by 2025.