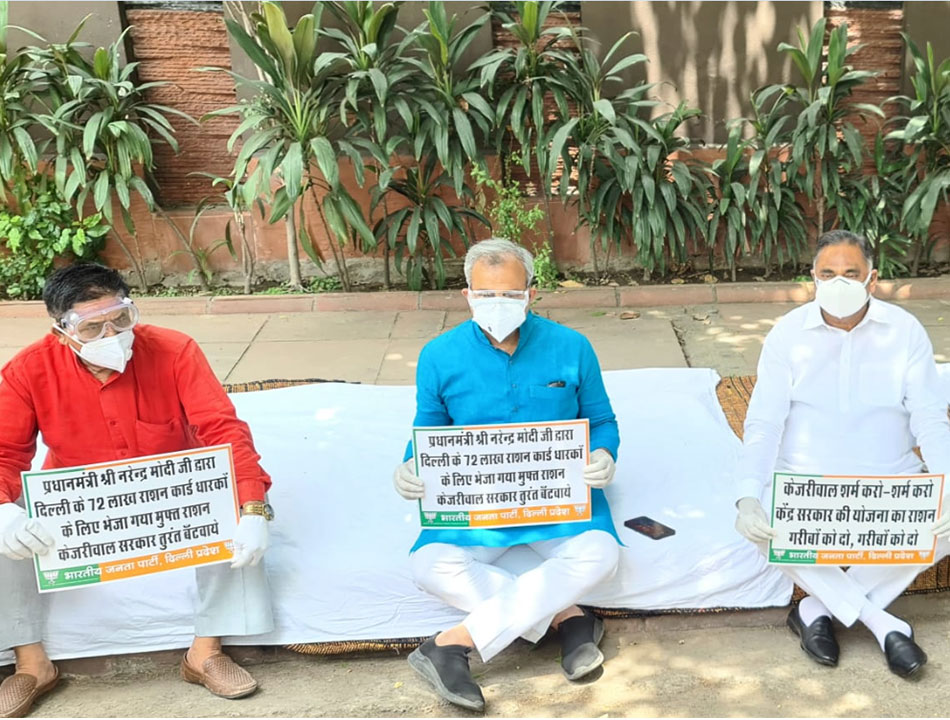 New delhi, 12 May. The Bhartiya Janata Party on Wednesday charged the Kejriwal Government with absolute failure to provide free rations to 72 lakh ration cardholders in the Capital under the centrally sponsored scheme during the lockdown and demanded that steps should be taken to implement the scheme without any further delay.

The BJP MLAs delegation led by its Delhi Pradesh unit president, Shri Adesh Gupta and Leader of Opposition in Delhi assembly, Shri Ramvir Singh Bidhuri also presented a memorandum to Chief Minister, Arvind Kejriwal at his residence drawing his attention to this serious issue and demanding that adequate directions should be issued without any further delay in this regard. The BJP legislators and office bearer’s delegation also staged a dharna in front of Kejriwal’s house as a mark of protest. The delegation comprised of all BJP MLAs including Shri Vijendra Gupta, Shri Mohan Singh Bisht, Shri Om Prakash Sharma, Shri Anil Bajpayee, Shri Jeetendra Mahajan, Shri Ajay Mahavar and Shri Abhay Verma. In addition to this, Delhi Pradesh media head, Shri Naveen Kumar and spokesperson, Shri Praveen Shankar Kapoor.

Expressing shock over the situation where the poor and marginalized along with akhs of ration card holders were being deprived of free rations announced by the Shri Narendra Modi Government for the months of May and June, both the leaders said the failure for this lay at the doorstep of Kejriwal Government as the Delhi Government had failed to issue a formal order for distribution of free rations through the ration shops. The BJP delegation wanted to meet the Chief Minister and hand him over the memorandum but the request for the same was declined.

The BJP memorandum stated that to Coronavirus and lockdown, the Prime Minister, Shri Narendra Modi had allocated free rations for 72 lakh ration cards holders for the month of May and June under the Pradhan Mantri Kalyan Anna Yojana. In this scheme and under the Food Security Act, Centre was providing for 8 kg of wheat and two kg of rice. Already almost two weeks of May have passed but no distribution of free rations has taken place due to the failure of the Delhi Government to issue formal orders to the PDS outlets in this regard. Under the law, these orders should have been issued by May one, but this was not done and as a result 72 lakh ration card holders have been let hanging without rations.

The BJP accused the Kejriwal Government of deliberately not issuing the orders for distribution of free rations to the poor fearing that the credit for the same would go to the Central Government. “This level of petty politics is being played by the AAP Government at the cost of the hunger of the poor. We do not want the credit for anything, but the Delhi Government should not delay any further the formal orders for distribution of these rations. The Central Government is spending Rs. 250 crore per month for providing free rations to the poor,”  the memorandum stated. Shri Ramvir Singh Bidhuri, Leader of Opposition in Delhi Assembly.