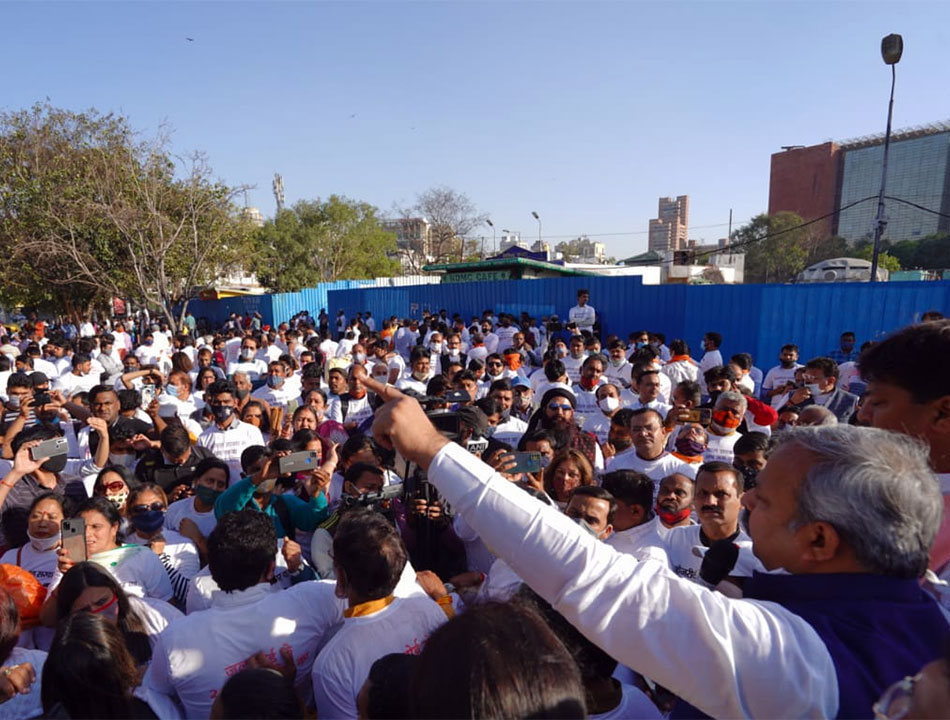 New Delhi, 1 March. Senior leaders of the state Bharatiya Janata Party on Monday staged  a Jansampark campaign near the Rajiv Chowk metro station where party workers travelled in metros covering all 183 metro stations in the capital highlighting the  message about the scam of Rs. 26000 crore in Delhi Jal Board to about 25 lakh commuters.

The Delhi party president Shri Adesh Gupta said the campaign has been launched to make the Delhiites aware about this RS 26000 crore scam because it is their hard earned money and they want an account of each and every paise from the Kejriwal government. Present there were state vice president Shri Ashok Goyal Devrah, State Mahila Morcha President Smt Yogita Singh besides presidents of other morchas.

Stating that Delhiites were paying a heavy price for electing such a government which only believes in false propaganda and was least bothered about welfare of the people, Shri Gupta said his party would continue to raise people’s voice and agitate till Kejriwal government came clean on this issue. He charged that the way Raghav Chadha and Satyendra Jain along with Kejriwal have emptied the coffers of DJB, the whole Delhi knows it. The fact is this money is being used by kejriwal for personal glory and political expansion of his party, he charged.

Shri Gupta took the opportunity to remind the people gathered there that pollution level is so bad that Greenpeace Southeast Asia has, in its report, said 54000 people died in  the capital last year due to  worsening pollution or 148 deaths a day. On stubble burning, chemicals worth only Rs 24000 was purchased, but a whopping Rs 7 crore were spent on publicizing it, he said.

The party has questioned the stoic silence of the chief Minister Arvind Kejriwal on the DJB’ s Rs 26000 crore scam, saying it shows everything is fishy about this. Addressing a large number of party workers at the Rajiv Chowk metro station here on Monday, Shri Gupta said it was the hard earned money of the Delhiites which was literally going down the drain as there has been no account of it so far.

The fact of the matter is why should people of Delhi pay for this irregularity on part of the Kejriwal government. Why the people of Delhi are being forced to drink impure and contaminated water, he asked.

Shri Gupta, taking a potshot at Kejriwal, said he had come to power with much fanfare and tall promises of providing clean administration and development but what we have seen down the line in past six years is just the opposite of it. Forget the clean administration even water is not clean and now you have this scam, he said. The developmental work has come to a standstill and there are no public amenities worth the name, he added.