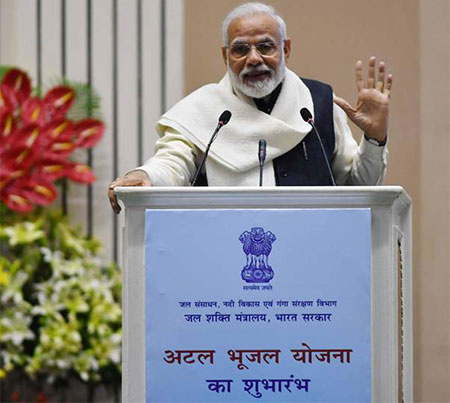 This scheme will be implemented in scheme Maharashtra, Haryana, Karnataka, Rajasthan, Madhya Pradesh, UP and Gujarat. “In these states, in 78 the districts, in 8,300 gram panchayats, ground water situation is very worrisome," said the Prime Minister.

PM Modi urged farmers to opt for the less water-intensive crops and go for water conservations.

Speaking on the occasion, Prime Minister said that today the name of a big project which is very important for the country, Rohtang Tunnel, connecting Manali, Himachal Pradesh with Leh, Ladakh and Jammu Kashmir, will now be known as Atal Tunnel. He also said that this strategic tunnel will change the fortunes of this region. It will help in promoting tourism in the region.

On Atal Jal Yojana, PM highlighted that the subject of water was very important to Atal ji and very close to his heart. Our Government is striving to implement his vision. Atal Jal Yojana or the guidelines related to the Jal Jeevan Mission, are big steps in proving the resolve to deliver water to every household in the country by 2024, the PM added. He said that this water crisis is worrying for us as a family, as a citizen and as a country also it affects development. New India has to prepare us to deal with every situation of water crisis. For this, we are working together on five levels.

“Atal Jal Yojna and the Jal Jeevan Mission guidelines are big steps in realizing the goal of supplying (tap) water to every household by 2024," Modi said during the program.

ATAL JAL has been designed with the principal objective of strengthening the institutional framework for participatory groundwater management and bringing about behavioral changes at the community level for sustainable groundwater resource management in seven States, viz. Gujarat, Haryana, Karnataka, Madhya Pradesh, Maharashtra, Rajasthan and Uttar Pradesh. Implementation of the scheme is expected to benefit nearly 8350 Gram Panchayats in 78 districts in these States. ATAL JAL will promote panchayat led ground water management and behavioural change with primary focus on demand side management

Out of the total outlay of Rs. 6000 crore to be implemented over a period of 5 years (2020-21 to 2024-25), 50% shall be in the form of World Bank loan, and be repaid by the Central Government. The remaining 50% shall be through Central Assistance from regular budgetary support. The entire World Bank's loan component and Central Assistance shall be passed on to the States as Grants.