Akshay Kumar is coming up with 5 top movies in 2019 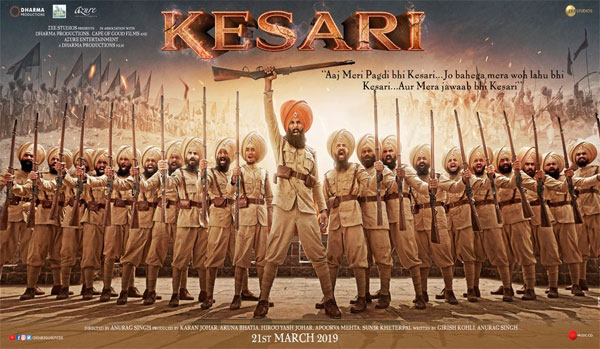 After 2018 success with 3 movies, Akshay Kumar is coming up with a series of 5 top movies in 2019. Last year in 2018, Akshay Kumar presented Ped Man, Gold and 2.0 in box offices which great success. This year he will bring Kesari, Good News, Mission Mangal, Housefull 4 and Sooryavanshi in box offices.

Probably Akshay Kumar was very successful superstar in 2018 by delivering 3 successful movies in 2018 leaving behind other superstars like Salman Khan, Aamir Khan and Shah Rukh Khan.
In the year 2019 Akshay Kumar is bringing Kesari, Good News, Mission Mangal, Housefull 4 and Sooryavanshi. These 5 movies is expected be very successful in 2019.

This movie is produced by famous producer Karan Johar and directed by Anurag Singh. The release date of this movie is set on March 21.

The Good News is Hindi movie starring Akshay Kumar, Kareena Kapoor Khan, Kiara Advani and Diljit Dosanjh. This movie is reportedly about a couple trying for a baby and this movie is set to release in July 2019.

The Hindi movie Mission Mangal is based on the India's first mission to Mars and this movie is set to release during Independence Day 2019. In this movie Akshay Kumar is in lead role and other stars of movie are Sonakshi Sinha, Vidya Balan, Kirti Kulhari, Taapsee Pannu and Sharman Joshi, among others.

The Hindi movie Housefull4 will be released during Diwali 2019 and brings many stars in one movie. I this movie you can see top start like Akshay Kumar, Riteish Deshmukh, Chunkey Panday, Bobby Deol, Kriti Sanon, Kriti Kharbanda and Pooja Hegde in one stage. Movie is drama and comedy film which is expected to do well on the box office.

The Hindi movie Sooryavanshi is another movie coming in 2019 in which Akshay Kumar is in lead role. The filmmaker of this movie is Rohit Shetty and this Hindi movie is expected to release in December.