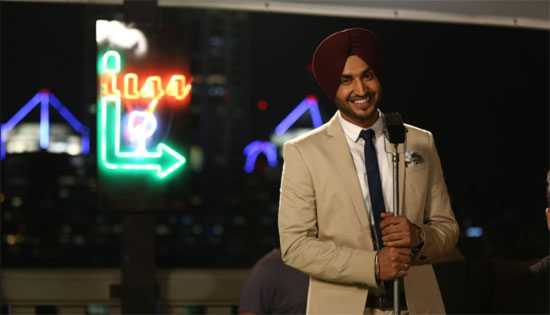 Popular singer Jassie Gill, who is eagerly anticipating the release of his big Bollywooddebut, Happy Phirr Bhag Jayegi, produced by Eros International and Aanand L Rai’s Colour Yellow Productions and directed by Mudassar Aziz, had a whale of a time shooting for the laughter riot.

Besides sharing the screen space with Sonakshi Sinha for the first time and working with Aanand L Rai and his costars including Diana Penty, Jimmy Shergill, Piyush Mishra and Ali Fazal, the film is quite special to Jassie for quite a few reasons, including the fact that he had to sport several pagdis in the movie!

“Since I belong to a Sardar family, I’ve always been fond of wearing a pagdi,” Jassie informs as he recollects, “I used to have pictures of popular Punjabi singers on the wall of my room and I used to look at them and wear pagdis. When I started my singing career and was in college, I wore a pagdi for one of the scenes in a music video.” Then i wore Pagdi in my video Bapu Zimidar & Att Karti, with the grace of Almightly, both became sesational hits.

While most of his costars only changed into their next costume, Jassie would take relatively more time to change since he had to wear a Pagdi as well! Interestingly, Mudassar along with the cast would often playfully pull his leg over this by blaming him for delaying a shot!

“I didn’t anticipate that I’ll get the opportunity to wear a pagdi in just my debut film. People all over Punjab have really appreciated my pagdi look in Happy Phirr Bhag Jayegi. It gives me a feeling of pride to wear a pagdi,” Jassie adds.