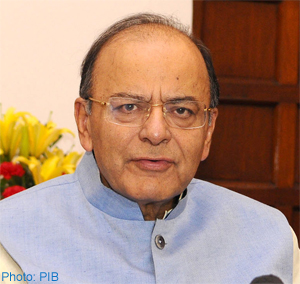 Former Finance Minister Arun Jaitley has shared his experience with the highly soughted scheme of the Modi government known as Good and Services Tax-GST. Jaitly's experience is very crucial in terms of GST as it was implementated futinh his tenure. In his article, Jaitley has said that the GST has to be devised keeping several facts in mind including the varuiys parameters. Needless to say, India had multimple merket which needed to be consoldated. Aslo India had is a Union of States where both the Union and the States have to be fiscally strong. During this article you can get details of the GST during its journey.

It has been one year since the country’s switchover to a new indirect taxation system - the Good and Services Tax. One single tax replaced seventeen taxes and multiple cesses imposed by the Central and the State Governments. This had obviously necessitated every assesse to file multiple returns, have an interface with multiple inspectors and assessing authorities, suffer the cascading effect of having to pay tax even on the tax component already paid, having to pay tax separately in every State when movement of goods took place, to suffer the inordinate delays of multiple checkpoints and obstacles, and being fed up with the taxation system devises measures on how to bypass the tax system. The very foundational idea of the Goods and Services Tax was not original. It had been experimented in several countries of the world. The Indian model had to be devised keeping several facts in mind. An indirect tax, unlike a direct tax, is regressive. In a country where diverse sections of population with different paying capacities, everybody pays the same rate of tax, the rate cannot be different for the wealthy and the not so wealthy as in the case of a direct tax. But in the selection of the commodities which are tax-free or less taxed, a differential could be made in a society like India. Secondly, India had multiple markets, each constituting a different market which needed to be consolidated. Thirdly, the essence of Indian federalism had to be respected. India is a Union of States where both the Union and the States have to be fiscally strong. A weak Union is detrimental to both national sovereignty and growth and weak States won’t be able to deliver development. India is not a confederation of States and, therefore, strengthening of State revenues cannot be at the cost of Central revenues. If the Union does not survive, what will happen to India i.e. ‘Bharat’ – the Union of States?

The Flawed UPA Model of GST

My friends in the UPA and the Congress Party occasionally raise questions as to why some Chief Ministers were not comfortable with the idea of GST during the UPA period. The fact is that almost everyone wanted the GST but not a single State was comfortable with the UPA’s model of GST. There were two prime reasons for this.

The second reason why the UPA failed in its effort to bring the GST was that every State was apprehensive that during the transition period there would be a loss of revenue to the States. How would the States be compensated for the loss of revenue? Their demand seemed logical but UPA chose not to address it. The Constitution amendment proposed by the UPA had no provision for compensating the loosing State. Manufacturing States like Tamil Nadu, Gujarat, Maharashtra and Karnataka were particularly apprehensive. They had raised a flag “No Compensation No GST”. Having brought them to the negotiating table on the strength of the CST payment I agreed to pay to the States, after discussing in the GST Council, a 14% increase of revenue for the first five years for any loss of revenue. The States jumped for this proposal and we succeeded in winning trust of the States back for the GST enactment. Our positive commitment to the federal principles was unambiguously established.

The Experience After One Year

When the GST was to be launched on the 1st of July, 2017, we were being advised by the Congress to postpone it. A reluctant Government can never take reformist decisions. We went ahead. At the initial stage, we fixed the first set of rates. A large number of requests started coming from trades, industry and, therefore, we started rationalising the rates.

The initial few meetings of the GST Council started reducing the rates wherever it was desirable. If we look at the entire basket of goods and services, the rates today taken collectively are far lesser than under the previous taxation system. With the cascading effect of tax on tax going away, the liability in any case came down.

To develop a consensus, we passed the Constitution amendment enabling the GST unanimously. All legislations enabling the GST were passed unanimously. The rules were put before the GST Council. The have been approved unanimously. We have held 27 meetings of the GST Council so far where every decision has been taken by consensus and unanimity. All the rates are fixed through consensus on the recommendation of the Rates Committee. Whenever there are contrarian views in the Council, a representative Group of Ministers of the State is constituted to work out a via media and we try to evolve consensus one way or the other. I do realise that the delicate federal balance in India has to be maintained. The GST Council is India’s first experience at cooperative-federalism based decision-making authority. We cannot afford to risk a failure and, therefore, it is functioning as to arouse confidence amongst all States. The meetings have always been consensus based. The only area where unanimity seems to be lacking is the television bites that some Ministers’ give after the meeting, which may be necessary for their own political positon. I am willing to live with the experience of a healthy debate and unanimity within the Council and a show of dissent outside the Council meetings.

We have had amongst the smoothest switchovers in one of the largest tax reforms in the country. All the check-posts disappeared overnight. The system of input tax credit ensures that disclosures are made. The GST has encouraged enormous voluntary tax registration. Detailed calculations done in this year’s Economic Survey show that as of December 2017, about 1.7 million registrants were those who fell below the GST threshold but nevertheless chose to be part of the GST. Similarly, more than 50 percent of those who could have chosen to opt for the simpler composition scheme chose to register under the regular GST scheme.

To ensure further compliance, the e-Way Bill has been put in place. Once the invoice matching starts, evasion would become extremely difficult. The assessee’s life has become easier. He files his returns online and his interface with multiple authorities is gone. The return filing process is also being simplified. The Group of Ministers’ has already worked out that mechanism. The overall weighable of the tax basket has come down. As the tax base increases, our capacity to rationalise taxes and slabs will increase further.

The very small businesses have been protected. Those with turnover of less than Rs.20 lakhs don’t pay GST. Those with a turnover upto Rs.1 crore can compound their GST with a payment of 1% tax on the turnover, and file a quarterly return.

Rahul Gandhi has been advocating a single slab GST for India. It is a flawed idea. A single slab GST can function only in those countries where the entire population has a similar and a higher level of paying capacity. Being fascinated by the Singapore model is understandable but the population profile of a state like Singapore and India is very different. Singapore can charge 7% GST on food and 7% on luxury goods. Will that model work for India? Since GST is a regressive tax, the poor have to be given a substantial relief. Thus most food items – agricultural products and the AamAadmi used products have to be tax exempt. Some others have to be taxed at a nominal rate. The others could be taxed higher. Eventually, as the collections improve, many more items from the 28% category can possibly come down. Only sin products and luxury goods can remain there. There would also be a scope again, depending on the collection going up, to merge some of the mid category slabs but for that we have to see the progress of the new tax regime and the possible upward movement in the collections.

The impact of the GST on the direct tax is already visible. Those who have to disclose business turnover are now having to disclose their income for the purposes of the income tax. The direct tax collection have, therefore, picked up as per the initial indications. When we look at the GST performance in the first nine months from July, 2017 to March, 2018, and add the entire amount collected - the CGST, SGST, IGST and the composition cess, we will get the sum total of the GST collection. In the very first nine months, the total amount collected is Rs.8.2 lakh crore– Rs.11 lakh crores if annualised, yielding a revenue growth of 11.9% i.e. a tax buoyancy of 1.22, which has historically been achieved very rarely for indirect taxes and espite rates being lowered for consumers. As more and more anti-evasion steps will be put in place, the tax buoyancy will increase further. The GST will strengthen the country’s tax base for the medium term, adding up to an additional 1.5 percentage points of GDP.

The indirect tax base is expanding. There is a seamless flow of goods and services across the country. The ‘Doing of Business’ has become simpler. The switchover has taken place without any major disruption. The IT system after initial teething trouble is functioning much better. For all of this, I want to express my heartfelt thanks to and appreciation for the efforts of the Revenue Secretary Shri HasmukhAdhia, all the officers of the CBIC and revenue and tax departments of the Center and all the states, officials of GSTN, and the Chief Economic Adviser, Arvind Subramanian.

There is always scope for improvement. Key areas of future action will include further simplifying and rationalizing the rate structure and bringing more products into the GST. I am confident that once revenue stabilizes and the GST settles, the GST Council will look into these carefully and act judiciously.

The biggest success of the GST has been that the GST Council has proved to be an extremely effective and powerful decision making federal institution. The Finance Ministers’ of the States have created history in the matter of federal governance. It has indeed been my privilege to have got the cooperation of each one of them. Thank you, Finance Ministers for having collectively made the GST a historic transformation and an experience worth it for the country.