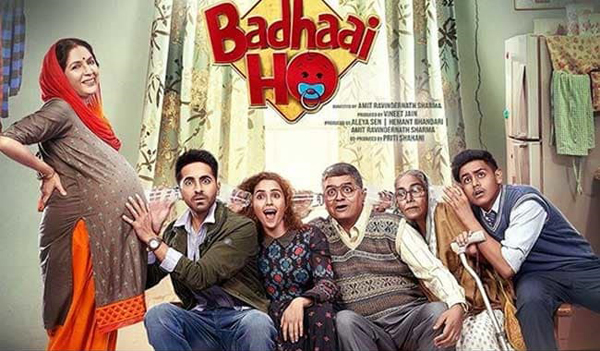 After creating much buzz with a hilarious trailer, director Amit Sharma’s Badhaai Ho starring Ayushmann Khuranna, Sanya Malhotra, Neena Gupta, SurekhaSikri and Gajraj Rao has finally hit the cinemas nationwide today and as expected, the film will surely keep up to the expectations of the audience to much extent due to its lovely screenplay and dialogues.

As Badhaai Ho releases today, Ayushmann Khurana continues to mark his presence felt in yet another unconventional film that keeps you entertained with a strong message to sidestep another stereotype of matured age pregnancy which is actually considered as a societal embarrassment in India.

"Badhaai Ho" pure cinema based on slice of life which showcases as how do the society reacts a mother of two grown up kids unexpectedly finds her pregnant in a matured age when they are believed to be retired from everything. However, this is not just about the society but how the family members feel socially embarrassed when they come to know about this situation and later how they tackle the this social embarrassment.

The story of Badhaai ho revolves around a middle-aged man Jeetender Kaushik (played Gajraj Rao), who is professionally a TTE in Indian railways, who gets shocked when comTraileres to know about the pregnancy of his  wife Priyamvada (played Neena Gupta). With the fear of facing the judgmental society, he ask Priyamvada to get an abortion to which she denies considering abortion is a sin. After they decide to have this baby, the family members come to know about the pregnancy which initially creates a havoc among them.

Nakul (played Ayushmannn Khuranna), who is the elder son of Jeetender and Priyamvada feels so embarrassed that he starts ignoring everyone including his colleague and girlfriend Renee (played Sanya Malhotra).

Director Amit Sharma has wisely used the brilliant cast of the film to create a simple, straightforward yet effective film which has some awesome light hearted comic sequences throughout the film to keep you entertained. Surekha Sikri who plays Ayushmannn’s grandmother in the film is absolutely hilarious to watch. Shanatanu Srivastava, Akshat Ghildial and Jyoti Kapoor’s script keep you engaged even after the plot loses its pace at times.

Ayushmann Khurrana and Sanya Malhotra looks adorable together and Ayushmann’s natural acting makes us feel more realistic about the plot.  Gajraj Rao and Neena Gupta are an absolute delight to watch with their perfectly timed expressions and dialogues. The best part of the film is, none of the actors have put extra effort to act funnier which makes it more watchable and realistic.

In a nutshell, Badhaai ho is a smartly made movie by director Amit Sharma and the casting of the film truly justifies their roles which makes the film worth watching. All we can say is “Badhaai Ho” to Amit Sharma for delivering a really good movie to us. So, just go and watch the film especially for the powerful performances of Neena Gupta and Gajraj Rao.