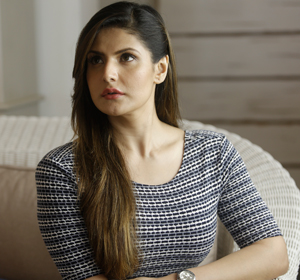 After the success of Hate Story 3, actress Zareen Khan is gearing up for the release of her upcoming film Aksar 2. Talking about being part of another franchise film, the actress stated, “I would call it luck. I am being offered another franchise film. I feel I’m just plain lucky, and maybe the makers feel the same. Honestly, when I am doing a franchise film, I don’t really think about the previous film because I don’t want to carry that baggage.”

Zareen will also be a part of Vikram Bhatt’s franchise film 1921 which is slated to release next year.

Zareen plays the role of Sheena who acquires the job of a Governess. Talking about her character, the actress said, “I play a girl called Sheena, who believes that if she gets this particular job, all her problems will be solved. But she gets into a mess because of the job. After a point she realizes that there is no way out but she still gets out of the situation with her courage and will power.”

“Everyone in the film is the victim and the schemer,”the actress concluded, giving us a gist of the film.