Linkage of rivers will help farmers to grow more crops and contribute in progress of the country: Vice President 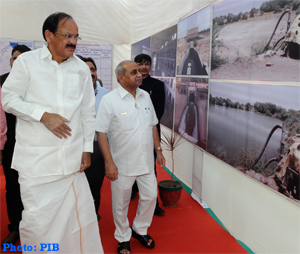 The Vice President said that there are many rivers in our country, and some of the states are receiving more water and in many other states, farmers are not getting benefits of these rivers. He further said that the Governments have been considering over inter-linking of rivers for decades. But there were many hurdles in its realization and so it took time to implement this concept, he added.

The Vice President expressed his happiness that Gujarat Government has given concrete shape to the concept of river linkage and has linked Narmada and Sabarmati rivers, so that more and more farmers are benefitted. He further said that he is fortunate to inaugurate the Plaque for the Project.

The Vice President said that the main sources of the progress of Gujarat are: Agriculture and Industry and every state must pay due attention to both of them. Work for everyone and water for every farm is very important and this was a beautiful dream of Pandit Deen Dayal Upadhyay, he added.

The Vice President said that there are many public-welfare programmes, specially irrigation programme already going on in Gujarat. He further said that by making small dams, this state has shown how to preserve rain-water that reaches the farms. Despite facing many hurdles, this state has built Sardar Sarovar Dam, which is one of the world's highest dam, he added.