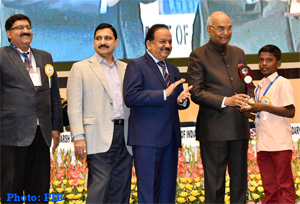 The President of India, Ram Nath Kovind, graced the concluding ceremony of the platinum jubilee celebrations of the Council of Scientific & Industrial Research (CSIR) in New Delhi today (September 26, 2017).

Speaking on the occasion, the President said that it is very creditable that the staff of CSIR constitutes only about three to four per cent of India’s scientific manpower – but contributes nearly 10 per cent of India’s scientific output. This emphasises how important CSIR is to the nation building process. When a scientist works hard in the lab, with integrity and sincerity and with the larger dream of helping society, he or she is playing the role of nation builder.

The President said that from the earliest days of our Independence, our country has been clear about the use and deployment of science and technology to achieve the goals of social development. This has meant both exploiting India’s rich wealth of traditional knowledge and intellectual property – of which CSIR is the custodian – as well as being open to the latest in science and technology, not being afraid of cutting-edge research and its discoveries, and where possible using these to help our common citizens. This aspiration remains important as ever as we strive to achieve a New India by 2022, when we complete 75 years as a free country.

The President said that our ambitious national programmes – such as Start-up India, Make in India, Digital India, Swachh Bharat, Namami Gange and the Smart Cities Mission – cannot be successful without our scientists and our technology incubators, particularly CSIR, contributing. The true test of scientific research lies in its ability to help our society leap frog social sector gaps, whether in health and hygiene, sanitation, education or agriculture, and make us a middle-income country in one human lifetime.

The President said that none of our developmental goals has any meaning without gender parity. The participation of women in science in our country is distressingly small. Less than two of every 10 scientific researchers in India are women. Of those who join the Indian Institutes of Technology each year, just about 10 per cent are women. These numbers are simply not acceptable. We have to take accelerated steps to promote the participation of girl students and of women in science and technology.