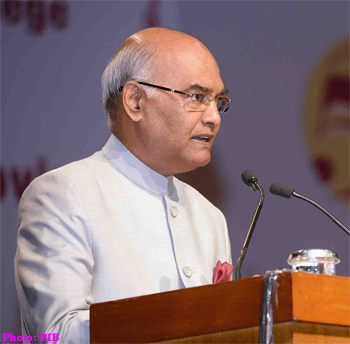 The President of India Ram Nath Kovind will present “National Tourism Awards” to various segments of the travel, tourism and hospitality industry at a function organized by Ministry of Tourism in Vigyan Bhawan, New Delhi on World Tourism Day (27 September,2017). The function will be presided over by theMinister of State (Independent Charge) for Tourism ShriShri Alphons Kannanthanam

These awards are being given since the early 1990s and are presented to State Governments / Union Territories, classified hotels, heritage hotels, approved travel agents, tour operators and tourist transport operators, individuals and other private organizations in recognition of their performance in their respective fields and also to encourage healthy competition with an aim to promote tourism. In an attempt to encourage States and Union Territories to put into place effective mechanisms for maintaining cleanliness at tourist destinations, a new Category of award “Swachhta Award” has been introduced this year. Other new categories of awards being introduced this year include “Best State for Adventure Tourism” and “Best Wildlife Guide”.

The date for the Awards has been selected to coincide with World Tourism Daywhich is celebrated annually on 27th September, to coincide with the anniversary of adoption of the statutes of the United Nations World Tourism Organisation (UNWTO). Its purpose is to foster awareness among the international community of the importance of tourism and its social, cultural, political and economic value. The theme for World Tourism Day 2017, as announced by UNWTO is “Sustainable Tourism – a Tool for Development”.

The Award function will also include :

Invitees at the function will include Tourism Ministers of States, Central and State Government Officials, Representatives from Diplomatic Missions, Members from the Travel and Hospitality Industries, including leading Hoteliers, Travel Agents and Tour Operators, Travel Media and the Mainstream Media.