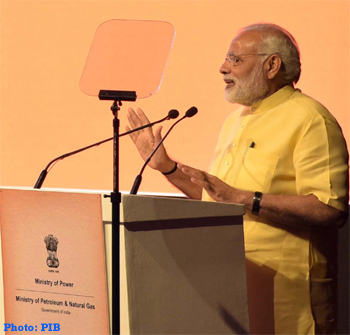 The Prime Minister, Narendra Modi, yesterday launched the Pradhan Mantri Sahaj Bijli Har Ghar Yojana, or Saubhagya, at New Delhi. The aim of this scheme is to provide power to all homes.

On the occasion of the birth anniversary of Pandit Deendayal Upadhyay, the Prime Minister also dedicated a new ONGC building - the Deendayal Urja Bhawan.

The Prime Minister also dedicated to the nation, the Booster Compressor Facility in Bassein Gas Field.

Speaking on the occasion, the Prime Minister gave examples of the success of Jan Dhan Yojana, insurance schemes, Mudra Yojana, Ujjwala Yojana, and Udan, to highlight how the Union Government is implementing schemes which benefit the poorest of the poor.

In this context he mentioned the Pradhan Mantri Sahaj Bijli Har Ghar Yojana, which would provide power connections to all the estimated four crore households which currently did not have a power connection. The outlay for this scheme would be over Rs. 16000 crore. These connections would be provided free of cost to the poor, the Prime Minister said.

Speaking to the accompaniment of a presentation, the Prime Minister recounted how he had set a target of electrifying over 18000 unelectrified villages within 1000 days. He said less than 3000 villages are now left to be electrified.

He explained how coal shortages have become a thing of the past, and capacity addition in power generation has exceeded targets.

The Prime Minister also spoke of an increase in renewable power installed capacity, towards the target of 175 GW by 2022. He mentioned how the power tariff in the case of renewable energy has been reduced significantly. A considerable increase has also been made in transmission lines.

The Prime Minister mentioned how the UDAY scheme has brought down losses of power distribution companies, describing it as an example of cooperative, competitive federalism.

Explaining the impact of economies of scale in the UJALA scheme, the Prime Minister said that the cost of LED bulbs has come down significantly.

The Prime Minister said that New India will require an energy framework that works on the principle of equity, efficiency and sustainability. He said the change in work culture in the Union Government is strengthening the energy sector. This in turn, will positively impact the work culture of the entire country, he added.