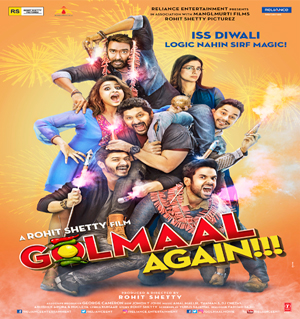 Mumbai:The makers of Golmaal Again have launched four posters from the film just a day before the release of the official trailer! They say a picture speaks a thousand words, and these posters are no less!

The posters give out a very spooky vibe and you can see that there is something that has instilled fear in the hearts of Ajay Devgn and his all-boy gang!

While the boys are definitely spooked by something, Parineeti Chopra looks like she’s having a good time!

With every poster, the makers are just teasing their audience who are waiting with bated breath for the trailer that will release tomorrow!