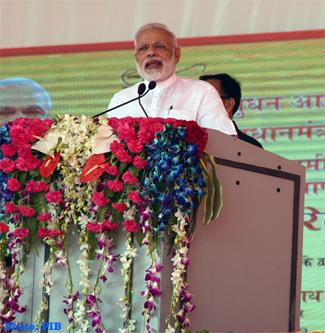 The Prime Minister, Narendra Modi, today performed Shramdaan for the construction of a twin pit toilet at Shahanshahpur village in Varanasi. He interacted with the people, who have resolved to make the village open-defecation-free. He appreciated their initiative of naming the toilet "Izzat Ghar."

The Prime Minister visited a Pashudhan Arogya Mela organised at the village. He was briefed on various health and medical activities being performed at the premises. These included surgeries on cattle, ultrasonography etc.

Addressing a large gathering on the occasion, the Prime Minister congratulated the Chief Minister of Uttar Pradesh, Yogi Adityanath, and the State Government, for the successful setting up of the Pashudhan Arogya Mela. He said this is a new effort which would benefit the animal husbandry sector in the State. He said that increase in milk productivity will lead to economic benefit for the people. He said cooperatives can help consolidate the gains in the dairy sector, as has been the case in other parts of the country.

Describing the well-being of people as the priority for governance, the Prime Minister reiterated the pledge to double farm incomes by 2022. He noted that soil health cards are benefiting farmers significantly. He said each one of us should resolve to make a positive contribution by 2022, to achieve the India that our freedom fighters dreamt of.

The Prime Minister said that the feeling of "cleanliness being our responsibility", needs to be inculcated among all. He said this would go a long way towards ensuring wellness, and protecting the health of the poor. He said Swachhta is like a prayer for him, and cleanliness is a way to serve the poor.