Vipassana is an effective way to cleanse our mind and body, says President 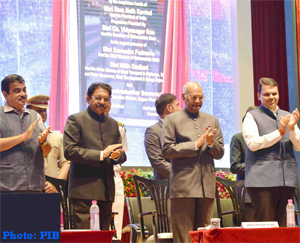 Speaking on the occasion, the President said that Vipassana is a meditation technique propounded by Lord Buddha which helps us connect with our inner selves. It is an effective way to cleanse our mind and body and equips us to face the stresses of modern life. If practised correctly, it can provide the same benefit as that received from certain medicines. In this way, Vipassana is also beneficial for health in addition to being a meditation technique. He stated that like Yoga, Vipassana should not be seen as being associated with any particular religion. It is for the welfare of all humanity.

The President said that the ideals of Buddhist philosophy are reflected in our Constitution, especially in the stated principles of equality, fraternity, and social justice. The architect of our Constitution, Dr. B.R. Ambedkar, had said that appreciation of the democratic system was present in ancient India and its roots in our country have been strong since age-old times. In this context, he gave the example of the democratic tradition that was in practice in the Buddhist Sanghas.

The President said that the urge for social change was central to Lord Buddha's philosophy, and inspired many social reform movements in later centuries. A number of such movements took place in Maharashtra itself and they in turn set an example for social reform movements in other parts of India, especially in the 19th and 20th centuries. In today's age of insecurity, the message of non-violence, love and compassion given by Lord Buddha is extremely relevant. Earlier in the day, the President visited the Deeksha Bhoomi shrine, and paid his respects to Babasaheb Ambedkar.