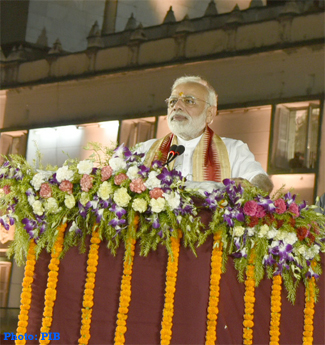 The Prime Minister, Narendra Modi, yesterday dedicated to the nation, the Deendayal Hastkala Sankul - a trade facilitation centre for handicrafts - at Varanasi. The Prime Minister had laid the foundation stone of this Centre in November 2014. yesterday, he visited the Centre, and was given an overview of the facilities developed there, before arriving on the dais for the dedication.

Narendra Modi flagged off the Mahamana Express through a video link. This train will connect Varanasi with Surat and Vadodara in Gujarat.

The Prime Minister dedicated a Jal Ambulance service, and a Jal Shav Vahan service to the people of Varanasi, through a video link. He distributed tool-kits and solar lamps to weavers and their children.

Speaking on the occasion, the Prime Minister said that in one programme from one dais, projects worth over 1000 crore have been either dedicated, or their foundation stone laid.

He described the Trade Facilitation Centre as one of the biggest projects for Varanasi for a long time. He said this Centre would help the artisans and weavers showcase their skills to the world, and facilitate a brighter future for them. He asked the people to encourage all tourists to visit this Centre. He said this would result in increased demand of handicrafts, and also boost the tourism potential of Varanasi, and indeed the economy of the city.

The Prime Minister said the solution to all problems is through development. He said the Government is focused on bringing about positive change in the lives of the poor and of succeeding generations. In this context, he praised the efforts of Utkarsh Bank.

Referring to the Jal Ambulance and Jal Shav Vahini launched today, the Prime Minister said that these represent the drive for development even through water-ways.

In the context of the Mahamana Express, the Prime Minister observed that Vadodara and Varanasi, which happen to be the two constituencies from which he contested the 2014 Parliamentary elections, are now connected via railway.

The Prime Minister said the country is progressing rapidly today, and firm decisions are being taken in the interest of the nation. He said eastern India must match the progress of the western part of the country, and the projects being launched today would go a long way in achieving this objective.