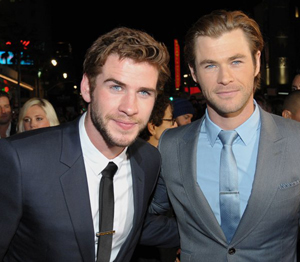 If you think that sibling rivalry only exists between you and your siblings, think again. Sibling rivalry exists even between the celebrity Hemsworth brothers, Though he definitely wasn't dealing with someone like Loki, it turns out that Hemsworth dealt with some significant sibling rivalry with his younger brother Liam, which ultimately helped him land the role of Marvel's Asgardian God of Thunder.

Even though "Thor: Ragnarok" is the third film within the "Thor" series (as well as Hemsworth's fifth feature film starring as the character), his place within the Marvel Cinematic Universe wasn't always a safe bet.

In an interview, Chris revealed that his little brother Liam almost got the role of Thor before him. According to the interview, he said, "I came into the audition with Kenneth Branagh and thought I nailed it and then never heard anything back. Months went by and then my brother, my little brother, Liam, was in Australia and sent a tape across and he got a call back, then another call back and then was down to the last kind of four or five people for it.

During the same time when Chris bagged the role of Thor, Liam ended up landing his own franchise with ‘The Hunger Games’ alongside Jennifer Lawrence.

Well, looks like this is one fierce competition to watch out for!