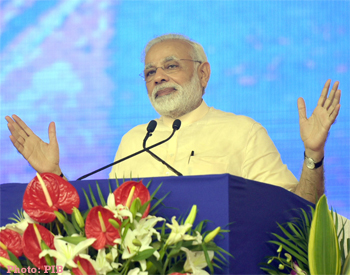 The Prime Minister, Narendra Modi, yesterday dedicated the Sardar Sarovar Dam to the nation. The occasion was marked by prayers and chanting of hymns at the Dam at Kevadia. The Prime Minister unveiled a plaque to mark the occasion.

Later, the Prime Minister visited the construction site of the Statue of Unity, an iconic structure dedicated to Sardar Vallabhbhai Patel, at Sadhu Bet, a short distance from the Sardar Sarovar Dam. He was given an overview of the progress of work at the site.

At a large public meeting in Dabhoi, the Prime Minister unveiled a plaque to mark the laying of foundation stone of the National Tribal Freedom Fighters' Museum. The occasion also marked the closing ceremony of the Narmada Mahotsav, which generated awareness about the River Narmada, in various districts of Gujarat.

Speaking on the occasion, he said the huge gathering shows the respect that people have for Maa Narmada. On the occasion of Vishwakarma Jayanti, he said that he salutes all those who are working to build the nation. Let us leave no stone unturned to build a New India by 2022, the Prime Minister exhorted.

The Prime Minister recalled Sardar Patel's vision of the dam. He said that both Sardar Patel and Dr. Babasaheb Ambedkar gave a lot of emphasis to irrigation and waterways.

The Prime Minister said lack of water resources has been a major impediment to development. He recalled visiting the border areas in the past, when BSF jawans did not have enough water. We brought Narmada waters to the border areas for the jawans, he said.

The saints and seers of Gujarat have played a very big role in the making of the Sardar Sarovar Dam, he said. The waters of the River Narmada will help citizens and transform lives, he added.

The Prime Minister said that in the western part of the country, there is water shortage, and in the eastern part, there is power and gas shortage. He said the Government is working to overcome these shortages, so that India scales new heights of development.

The Prime Minister said the Statue of Unity would be a fitting tribute to Sardar Patel, and would draw tourists from all over. He recalled freedom fighters from tribal communities, who fought against colonialism.