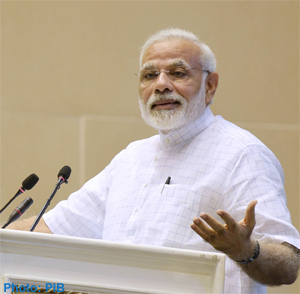 The Prime Minister, Narendra Modi, will dedicate the Sardar Sarovar Dam to the nation, at Kevadia in Gujarat on September 17, 2017.

The height of the dam was recently raised to 138.68 metres, facilitating a usable storage of 4.73 Million Acre feet (MAF). This will greatly benefit the participating States of Gujarat, Rajasthan, Madhya Pradesh and Maharashtra.

The project has helped transport the waters of the River Narmada, to the water-deficient areas of Gujarat through an elaborate canal and pipeline network. Irrigation from the project is expected to benefit about 10 lakh farmers, and drinking water to be supplied to various villages and towns, is likely to benefit upto 4 crore people. The project has been described as one of largest ever human endeavours for water transport. Upto a billion units of hydropower are also expected to be generated annually.

From the dam site, the Prime Minister will travel to Sadhu Bet, where the Statue of Unity, an iconic statue and associated memorial complex for Sardar Vallabhbhai Patel, is currently under construction. The Prime Minister will be given an overview of the progress of work on this project. The project comprises a 182 metre tall statue, an exhibition hall, a memorial garden, and a Visitor Centre.

The Prime Minister will attend the closing ceremony of the Narmada Mahotsav, and address the gathering at Dabhoi. He will lay the foundation stone for the National Tribal Freedom Fighters’ Museum during the event.

The Prime Minister will later visit Amreli. He will inaugurate a new market yard of APMC. He will also inaugurate new plants of Amar Dairy, and lay the foundation stone of a honey production centre. He will address a Sahakar Sammelan at Amreli.